While locals are likely to disagree, Forbes ranked Portugal as one of the best places to live due to its arguable affordability. Those coming from abroad, in particular, will find their purchasing power goes a long way in Portugal.

To truly understand the cost of living in Portugal, let’s take a look at the monthly budgets for a single expat, a family of four, and a digital nomad. Keep in mind that most of the values are averages, as prices can differ dramatically depending on the region and/or city.

On average, a single expat will need €1260 a month in Portugal on average.

A one-bedroom apartment costs around €750 a month in Portuguese city centers or around €600 outside city centers.

Keep in mind that this is an average and rent in Lisbon is more expensive, for example. Utilities will cost you around €130, including electricity, water, garbage, internet, etc.

A monthly transportation pass costs around €40. For your leisure budget, you will need at least €160 a month which is enough for eating out once a week, enjoying museums, etc. Budget around €180 for groceries.

These two last portions of your budget can go way up, depending on your lifestyle.

In regard to healthcare, EU citizens with a valid European Health Insurance Card can use the National Health Service (SNS) for free for up to 90 days in Portugal.

This allows them time to get registered as legal residents to continue using the public health system.

However, non-EU citizens are only entitled to use the public health systemic they are employed and pay social security in Portugal, having to be registered as legal residents as well.

Even if this is the case, before arriving in Portugal and becoming a legal resident, they must purchase private health insurance to cover medical care.

Family of Four in Portugal

As a family of four, expect to need at least €2600 a month in Portugal on average.

A three-bedroom apartment costs around €1300 in Portugal’s city centers. If you choose to rent outside centers, you can get apartments for less than €1000.

Transportation for a family of four should cost at least €150 for public transportation. If you want to drive instead, fuel can cost anywhere between €150 and €250 a month.

€500 is a good enough budget for leisure and eating out once a week as a family.

Education could cost you! Public schools are free in Portugal, but school is taught in Portuguese. If you want to place your child in a private international school, this could cost anywhere between €6,000 and €20,000 a year.

A weekly grocery shop should cost you around €125 a week, but this will depend on your food and supermarket choices.

The monthly budget for a digital nomad in Portugal is around €1300, but this will depend on a number of factors.

The most important – accommodation. A shared room in a hostel costs around €20 a night, while a private room starts at €40 a night. Opting for a shared room will save you a lot of money.

On the other hand, if you want to book a private Airbnb, these could cost upwards of €1500 a month in most places in Portugal.

If you are looking for a co-working space, a desk costs an average of €150 a month. Budget around €40 for a monthly transportation pass.

We’re guessing you want to enjoy all that Portugal has to offer as a digital nomad. We recommend budgeting around €300 for leisure activities, including eating out, museums, etc.

Keep in mind that you can spend a lot more, depending on your lifestyle.

If your accommodation includes a kitchen, you can save a lot of money by cooking. Groceries cost around €45 a week.

If you decide to eat out, the average affordable meal costs around €10 without alcohol. 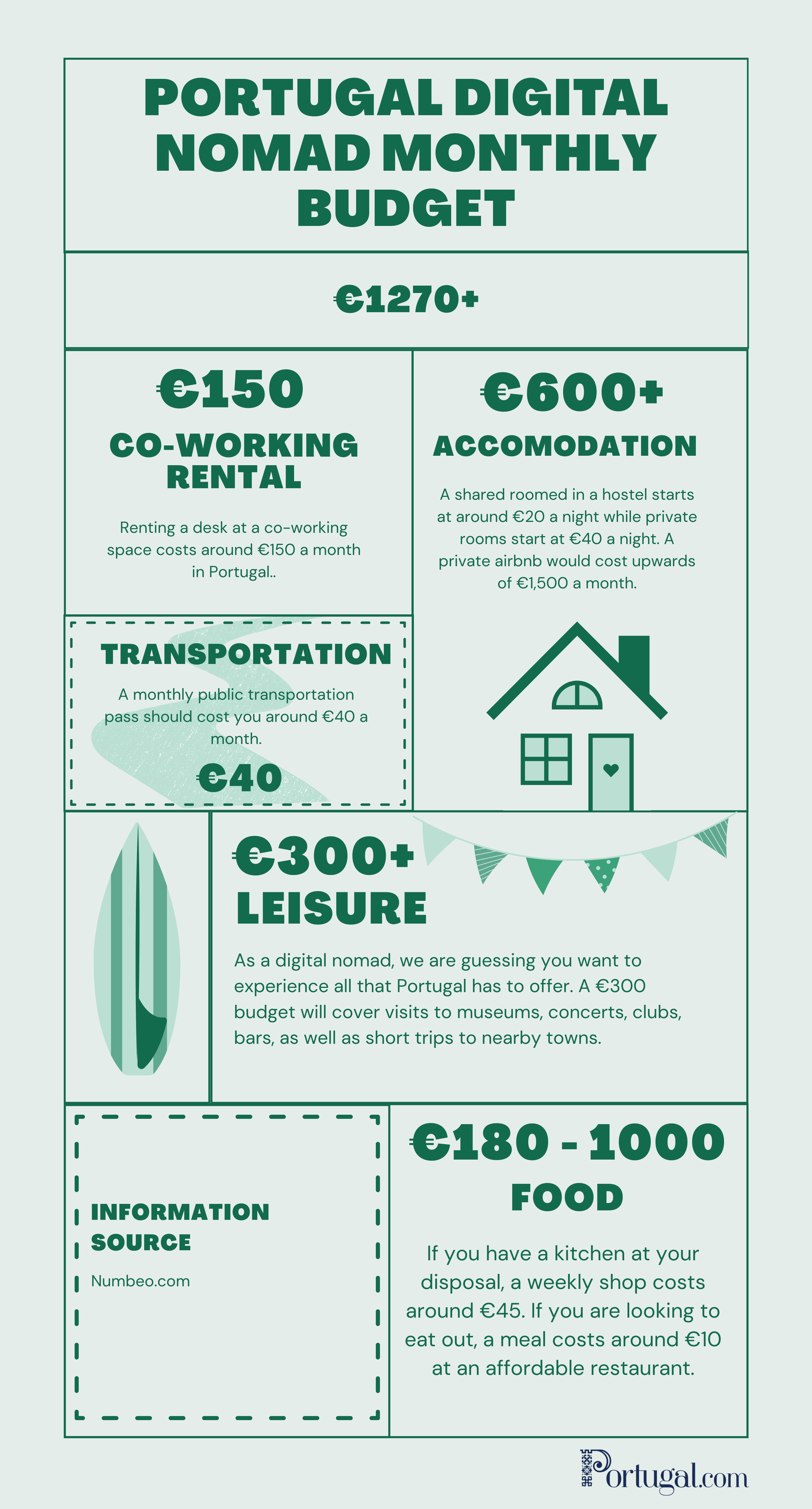 The monthly budget in Lisbon for an expat is around €1500.

You can get a one-bedroom apartment in the city center for around €830, although these can go for over €1,000.

Utilities, including electricity, wifi, etc., won’t cost you more than €150 a month, and public transportation is extremely affordable at €50 a month.

Groceries are known to be cheap in Portugal, especially if you know where to shop, and should not run you more than €200 a month.

However, similarly to going out to restaurants, bars, and museums, this portion of the budget is also dependent on your lifestyle.

Cost of Living in Lisbon

The monthly budget for an expat in Porto is around €200 cheaper than in Lisbon, at around €1300.

For utilities, expect to pay around €140 a month, including heating, electricity, gas, as well as wifi and phone data.

A monthly transport pass costs around €35, which is much more affordable than renting a car and paying for fuel.

Budget at least €150 for eating out in restaurants and exploring the city’s culture and nightlife.

This part of the budget can be reduced or increased depending on your lifestyle, along with your monthly grocery budget, which averages around €200 a month.

Cost of Living in Porto

A one-bedroom apartment costs around €740, although you can always opt for renting a room which should cost less than €500.

The public transportation system is quite efficient, and a monthly pass is around €35.

Utilities are a lot cheaper than in mainland Portugal at around €120, including phone data and cable TV.

Groceries for a single person average out at around €40 a week.

Cost of Living in Funchal

The monthly budget for an expat in Faro is less than €1400.

A one-bedroom apartment costs around €750. However, you can save here by renting a room for less than €400.

A monthly transportation pass is around €50 or less for buses. You can also get a train to many cities from Faro, such as Lisbon and Porto.

Utilities cost around €150, including phone data and cable TV.

For exploring Faro, eating out at your favorite restaurants, and exploring the nightlife, budget around €200 a month. You can easily spend less or more, depending on your lifestyle.

Groceries for a single person average out at around €50 a week.

Cost of Living in Faro

The monthly budget for an expat in Braga is at least €1090.

A monthly transportation pass is around €30 or less. You can also get a train to many cities from Faro, such as Lisbon and Porto.

Utilities cost around €130, including phone data and cable TV.

For exploring Braga, eating out at your favorite restaurants, and exploring the nightlife, budget around €160 a month. You can easily spend less or more, depending on your lifestyle.

Groceries for a single person average out at around €45 a week.

Cost of Living in Braga

Cost of Living in Portugal vs. the USA & the UK

Portugal vs. the USA

Rent is more affordable in Portugal than in the US. The average rent for a one-bedroom apartment in Lisbon is around €1,150, whereas this will cost you around $2,300 in Washington DC.

A monthly public transportation pass in a Portuguese city is less than €50 a month, while in the US, these go for over $70 dollars, although prices can differ highly by state.

According to Numbeo, Knoxville, Tennessee, is one of the most affordable cities in the US. Even so, grocery prices in Knoxville are 44% higher than in Lisbon. Restaurant prices are around 16% higher.

Portugal vs. the UK

Consumer prices in the UK are 35% higher, and rent is almost 40% more expensive than in Portugal.

Rent is a lot more affordable in Portugal than in the UK. The average rent for a one-bedroom apartment in Lisbon is around €1,150, whereas this will cost you around €2,250 in London.

A monthly public transportation pass in a Portuguese city is less than €50 a month, while in the UK, these go for over €70. In London, a monthly transport pass goes for over €150.

According to Numbeo, Leicester, is one of the most affordable cities in the UK. Even so, grocery prices in Leicester are 7% higher than in Lisbon. Restaurant prices are around 25% higher.

Take a look at:

5 Best Things to Do in Santa Maria, Azores

Cost of Living in Portugal vs UK 2023

GNR soldier accused of torturing immigrants gets 6 years in prison

Passadiços Do Mondego – A New Getaway in the Interior of Portugal