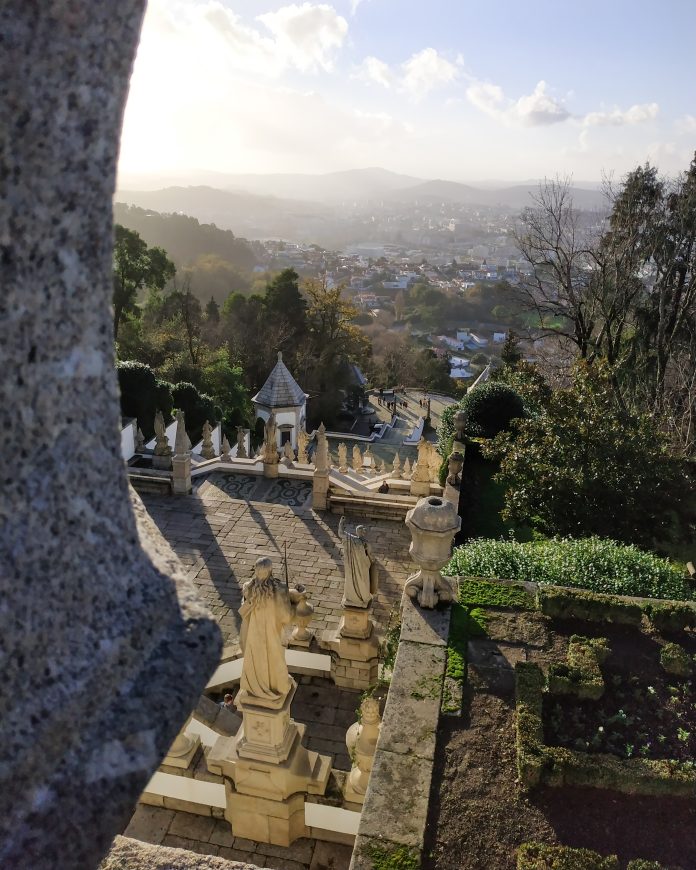 Braga is not usually a city that enters the itinerary of those who travel to Portugal. In fact, the north of Portugal as a whole attracts a relatively small number of visitors, most of them not going beyond Porto. But the Minho region has a lot to offer to visitors, Braga being its largest city and main destination for tourism.

To begin with, a bit of history couldn’t be missing, as Braga is the oldest city in Portugal. Its original name was Bracara Augusta, having been founded by Romans in the year 16 BC! Even though Braga is not very big, it is known as the “Rome of Portugal” because of its more than 30 churches. The main attraction of this city is without a doubt the Sanctuary of Bom Jesus do Monte, it’s located on top of a hill and to reach it, you’ll have to climb its staircase of over 600 steps. Although it may seem like a penance to climb the steps that give access to a church of neoclassical style, know that it is no great sacrifice, because the staircase, all in baroque style – is very beautiful and is one of the great reasons why many visitors go there.

The staircase is all worked, separated in levels, and in each one there are different fountains of water, such as those related to the five senses or to the three virtues (faith, hope and charity). Once you reach the top, behind the church you can explore a park with several chapels, flower beds, secluded benches and caves surrounded by vegetation, as well as a lake with rowing boats and a monocle from where you can “see Braga through a straw”, a popular saying in this area.

Although Braga has had a lot of religious importance throughout history, it ended up losing its prestige and importance in the 20th century, along with the Catholic Church, and today it is a welcoming university town with a very charming historic centre. That’s where you should start your journey to explore the interior of this city. The first place to visit is the Republic Square, where a beautiful fountain and a sign with the name of the city welcome visitors. It is the perfect place for a photo! In this same square, begins Rua do Souto, the main street of the historic centre and closed for pedestrians only, you’ll find that Braga’s main points of interest are all within walking distance. Since the northern part of the country tends to be colder, enjoy a coffee in the traditional Café A Brasileira, elegantly decorated in the 19th century style.

At the next corner, on the right, you will find Rua do Castelo, here you can see the Torre de Menagem, the only remaining construction from the medieval fortifications of the city, having been erected in the 14th century. Continuing along Rua do Souto, you will pass through Largo do Paço where you will see, on your right, the Chafariz do Castelo and the Rectory building of the University of Minho.

At this point, you’re near of close to another landmark attraction, the Sé de Braga or Cathedral of Braga. It is the first cathedral in Portugal, so old that it gave rise to the expression: “Older than the Cathedral of Braga”. This cathedral unites several architectural styles. They have been incorporated over the centuries and through the reforms the cathedral has undergone, making it even more incredible. It’s here that the tombs of D. Henrique and Dona Teresa, the parents of the first Portuguese king, can be found.

To complete the Rua do Souto journey, you’ll have to walk to the corner to find Rua Dom Diego de Souza, you will reach the end of the pedestrian walkway, which ends at the Arco da Porta Nova. Another architectural landmark of the city, this stone arch in Baroque and Neoclassical style was built in the 18th century and marked one of the entrances to the city when it was still surrounded by walls. From where, another attraction you can’t miss is the Biscainhos palace, nowadays, a museum operates inside and preserves the history of the place with original pieces and rooms. You can check out the beautiful halls and the baroque decoration that predominated in the past and you can also check the historical garden from the 18th century, one of the most significant examples of the Baroque period in northern Portugal. It is one of the city’s well-kept secrets.

Then you can visit the Town Hall Square to see the beautiful buildings of the Town Hall and the Public Library. Looking at all its beauty, it is hard to believe that bullfights were held there before it existed. From here, if you liked the previous Biscainhos garden, you’ll be amazed by Santa Barbara’s Garden this garden is present in almost all photos of Braga. In the background is the medieval part of the Paço Episcopal Bracarense. In fact, it is beautiful and makes for great photos! It is the best place to sit and recover your energy between one tour and another.

After this beautiful walk, it might be time to take a break for a meal. If you want to try something typical of the region, from here and the northern region in general, you must try the Francesinha, it is delicious, just sit in the restaurant in the city that suits you best, because they all serve the delicacy. Francesinha is a type of sandwich stuffed with sausage, sausage, ham, steak and other meats that is covered with cheese au gratin and served with a tomato-based sauce, beer and chilli pepper.

Believe, you’ll need to walk after your meal, the best option is to do a walk to another near attraction, you are now near the city’s main thoroughfare, Avenida da Liberdade. Here you’ll be able appreciate the flowerbeds in the part which is closed to pedestrians and admire the shop windows, as this is where Braga’s main commercial shops are concentrated.