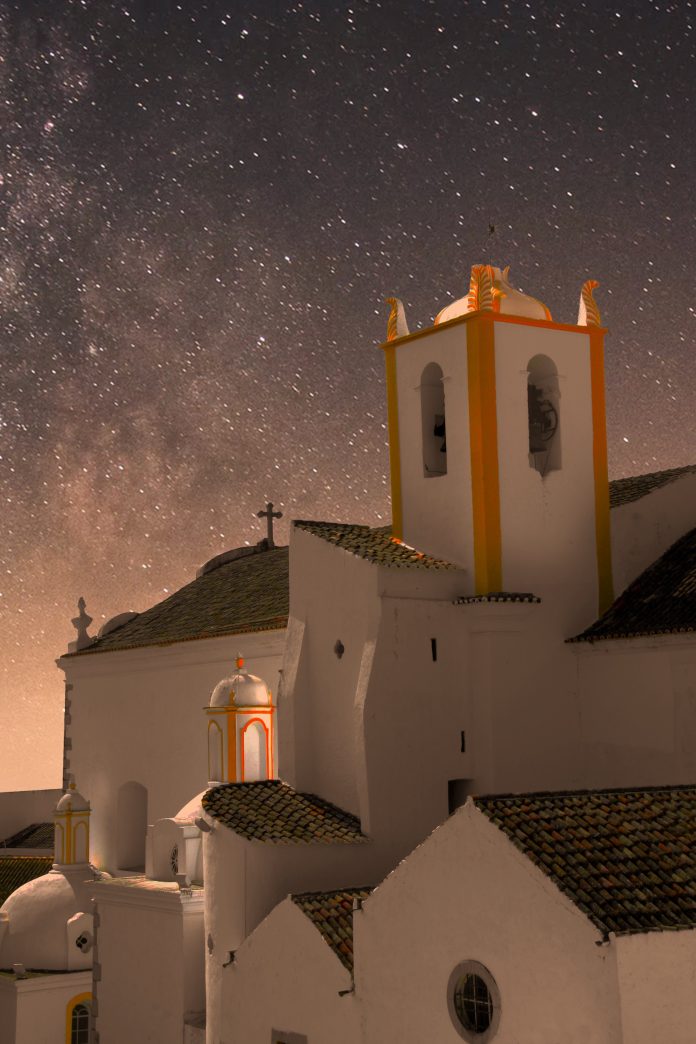 Tavira was built alongside River Gilão, in an intricate of narrow roadways and white houses that you feel like walking without haste. Jardim do Coreto is near the city center and the liveliest area, where numerous people walk around at night enjoying ice cream and the fresh air, especially on summer nights, when shows or other events bring truly more life to this area. In this city center, you can also find Ribeira Market, which after having been stopped from use for its original functions, was restored and is now a venue for entertainment and leisure. And from there to the castle where you have the most amazing view over the village, Tavira’s allure tempts us to discover its corners and reveal its secrets.

The juicy fruit orchards, don’t lack the gold of oranges. Furthermore, the whitewashed houses, the lacy chimneys, the hills covered with fig and almond trees, and, in the end, the vast mountain where eagles fly, birds sing, and flowers bloom. The castle and the many church steeples. The river reflects the houses and gardens as a mirror. The triangles of the “scissors” roofs. Beach and sea horizons. This is a quick sketch of Tavira’s charms and its municipality. Tavira is definitely a city of art and history and a must-visit point on the Algarve’s cultural itinerary. An invitation to discovery voyages.

There is a certain Arabic charm in this city, in its “scissors” or hipped roofs, which cut out from the sky in a peculiar way, and in the lattice doors made of interwoven wood that protect the houses, letting in air and sound, the heritage of the Arabs who inhabited this region.

Tavira is distributed along the two banks of the river, in an intricate of narrow streets and white houses that you feel like walking without haste. Jardim do Coreto is near the city center and the liveliest area, where many people walk around at night enjoying ice cream and the fresh air, especially on summer nights, when shows or other events bring even more life to this area. This is where the Ribeira Market is located, which, after abandoning its original functions, is now a space for entertainment and leisure.

What to do in Tavira

The oldest bridge, believed to have a Roman origin, is a 17th-century structure with walled parapets from which we can enjoy a beautiful view over the houses. Not as much as what can be seen climbing the Castle Tower, without a doubt the best viewpoint in the city, covering the undulating roofs, the domes of the churches, the river, and the salt flats, to the blue line of the sea that is its limit on the horizon. Local tradition says that, in the castle, there is an enchanted Moorish woman who every year, on the night of São João (the night of the 23rd to the 24th of June), appears to mourn her fate. She would be the daughter of Aben-Fabila, the Moorish governor who, when Tavira was conquered by the Christians, disappeared by magical arts, after enchanting his daughter. It is said that he intended to return to reconquer the city and thus rescue his daughter, but he never succeeded.

The effort of the climb to the top of Tavira’s Castle is compensated by everything that we can admire along the way. For example, when we cross the wall gate and are surprised by the beautiful Renaissance portal of Misericórdia, one of the 37 churches in Tavira. We can also visit the Islamic Nucleus to learn more about the city’s history or the Municipal Museum, located in the Palácio da Galeria, its most remarkable building. A little further up, there is the castle and the Church of Santa Maria, which occupies the place of the former largest mosque in the city; here rests D. Paio Peres Correia and the seven knights of the Order of Santiago from the work they had to conquer Tavira from the Moors in 1242. Close by, the Church of Santiago, was also built over an old mosque, as well.

On the other side of the river, on the hill in front, there are more churches to visit, such as the Medieval Chapel of São Brás, the Church of Ordem Terceira do Carmo, one of the most sumptuous temples in the Algarve area with exuberant baroque decoration, or the Church of São Paulo (Saint Paul), simpler and more austere.

To make up for the energy expenditure on so many tours, there’s nothing like trying out gastronomic specialties, especially fresh fish and seafood, such as octopus cooked in different ways or razor clam rice.

Tuna, in steaks, also stands out on the menus, as fishing was one of the most traditional activities in this area. We can learn more about this art at the Museum Center in Arraial Ferreira Neto, near the mouth of the river Gilão, built, in the earlier years, to house up to 150 fishermen and their families and was, in 2000,  transformed into a hotel.

The city’s charms continue to the Ria Formosa, which we reach by following the road parallel to the River Gilão and flanked by white salt marshes where you can see birds such as the long-legged wing, the flamingo or the tailorbird. In the end, in Quatro Águas, we can take the boat that crosses it and take us to the beach on the sand “tongue”, an island that separates the estuary from the sea. There are 11 kilometers of sand, which includes the beaches of Ilha de Tavira (Tavira’s Island), Terra Estreita (Narrow Land), Barril (Barrel), and Homem Nu (Naked Men), and where we can rest from this well-filled tour.

Top Things to do in Tavira: Be sure to…

Where to Stay in Tavira: 5 Best Hotels in Tavira

São Paulo Boutique Hotel is located less than 5 kilometers from the beach and features an outdoor swimming pool, bar, shared lounge, and large garden for guests to enjoy. The family rooms at this place come equipped with air conditioning, a fridge, a minibar, and a private bathroom. Certain rooms also feature a patio with views of the swimming pool. 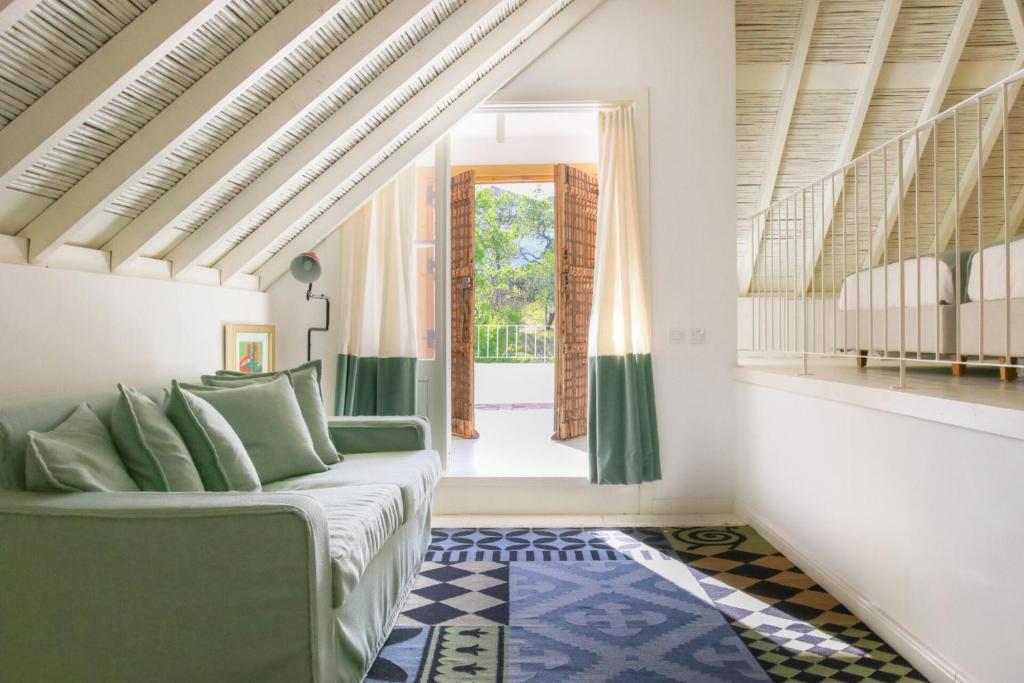 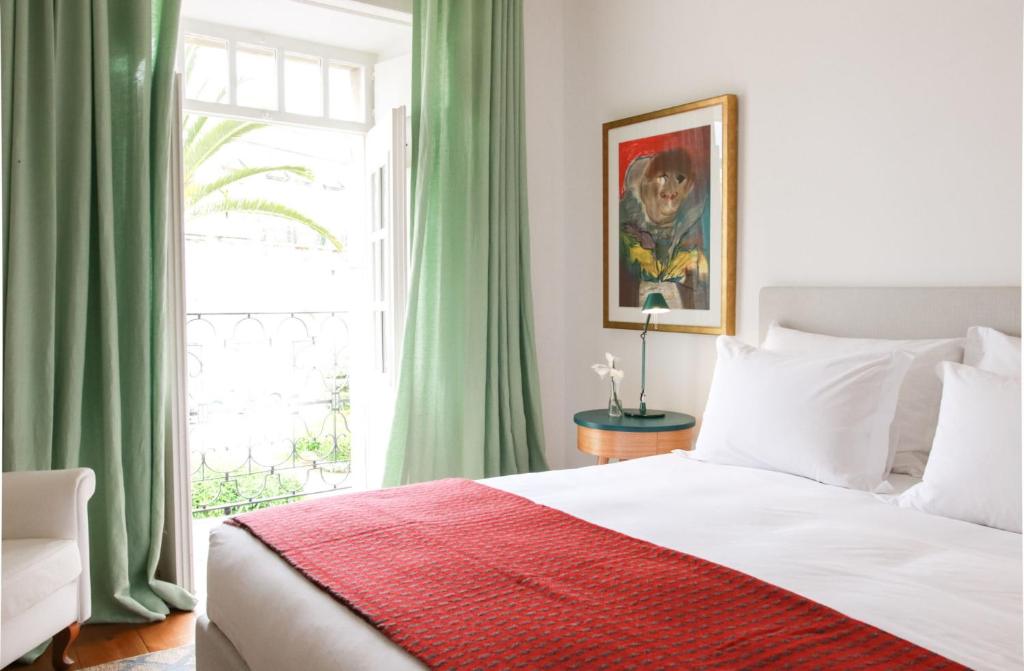 A 4-star hotel AZADI Tavira Hotel is 3 kilometers away from the beach and features a large outdoor pool, a fitness center, and two restaurants. OZADI Terrace serves seafood and offers panoramic views of the sea, while the Orangea Bistro serves tapas and wines in a relaxed environment. The guest rooms have vintage furniture and are equipped with air-conditioning, a flat-screen TV, a desk, and a balcony. 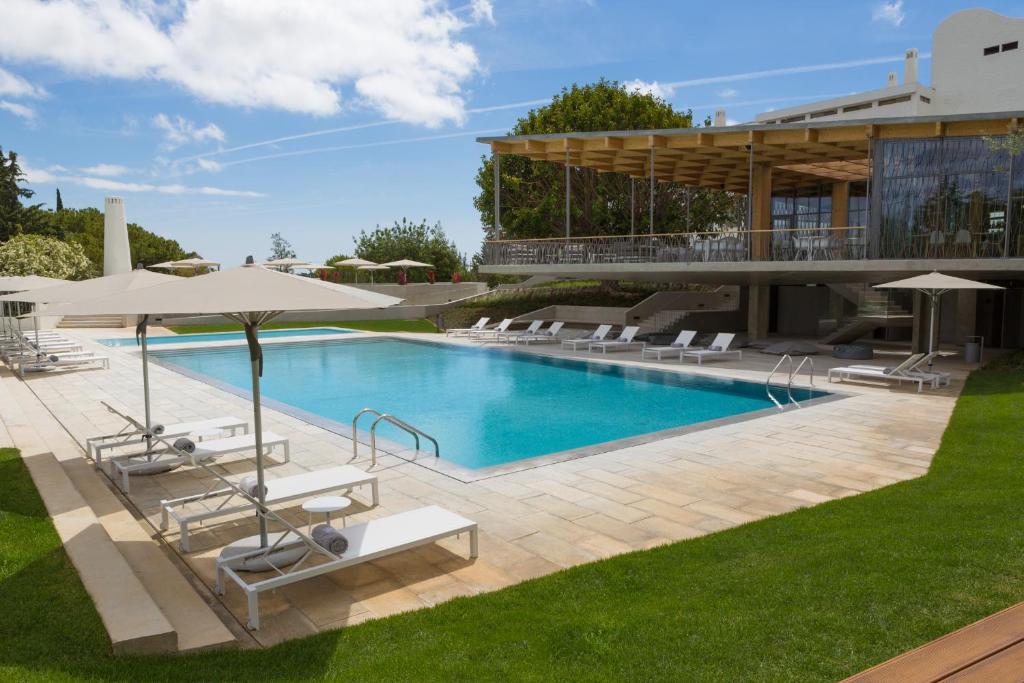 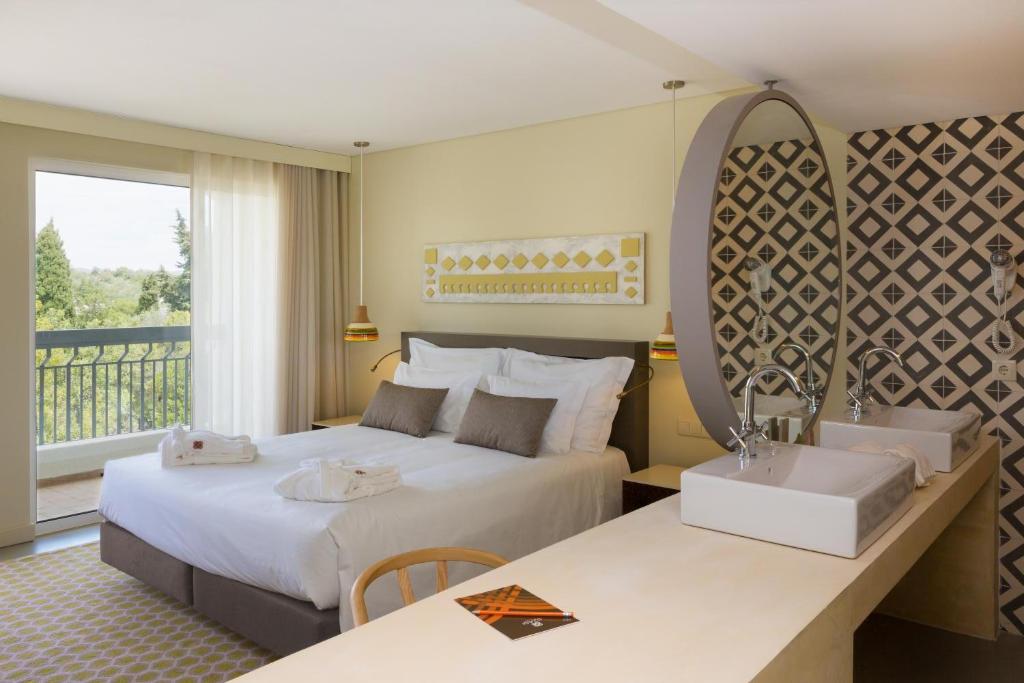 An 8-minute walk from the beach, Quinta dos Perfumes is an 88-acre farmhouse that features beautiful orange groves and a salt-water outdoor pool. Guests can enjoy a breakfast buffet from the panoramic rooftop terrace. The units include a furnished terrace with a sea view, and the studios have a kitchenette. All the units are equipped with a minibar, private bathroom, bathrobe, and pool towel. 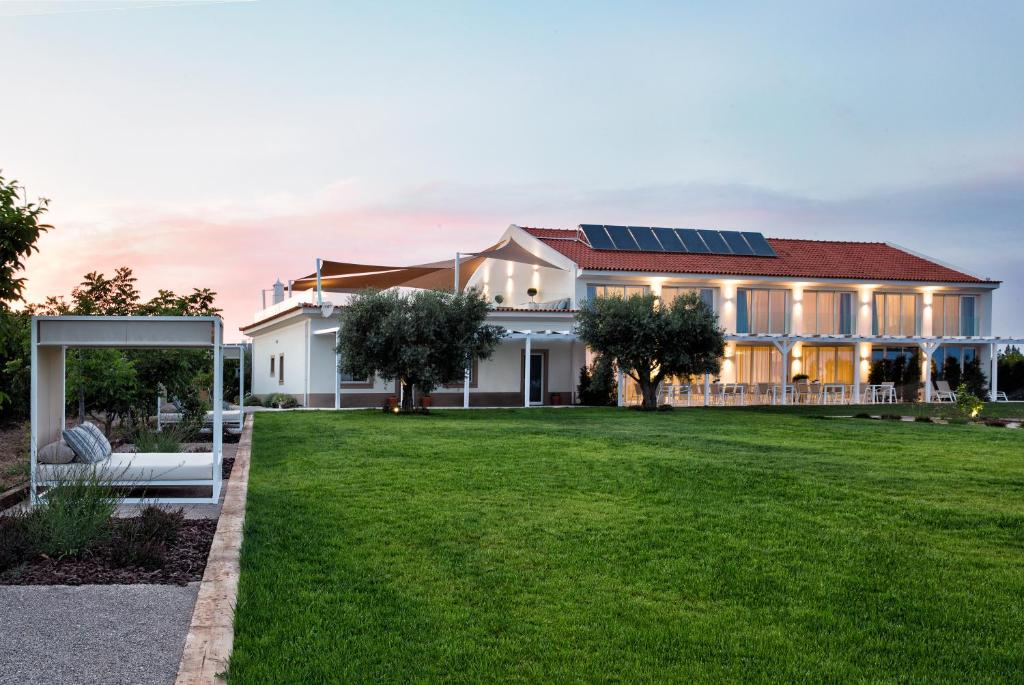 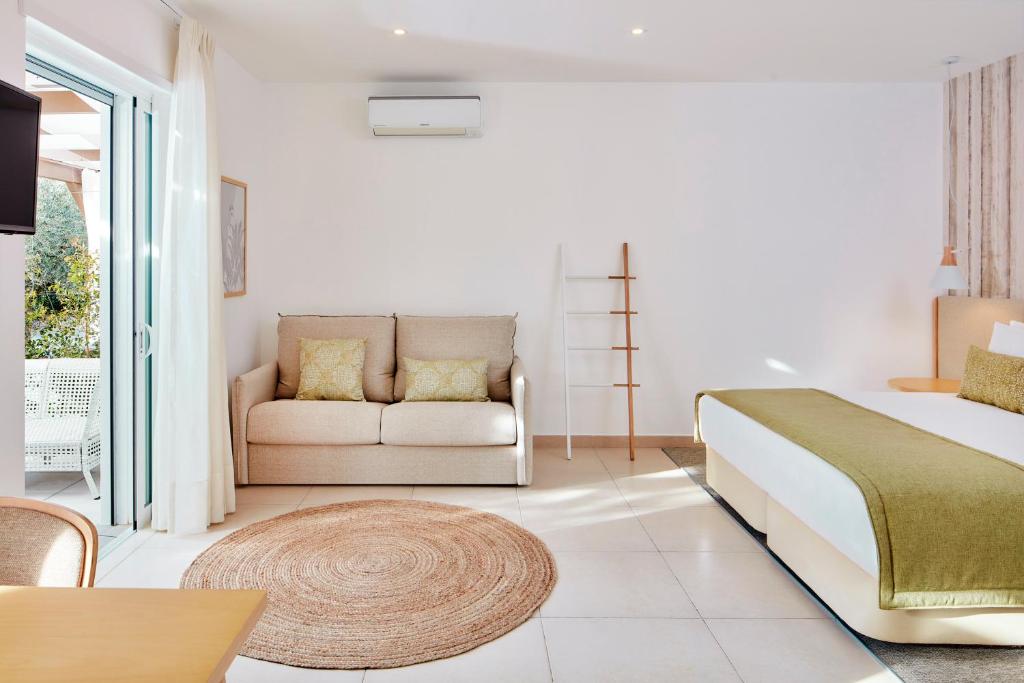 Less than 4 kilometers from the beach, Calcada Guesthouse is hidden away among the traditional streets of Tavira, combining a rustic exterior with a modern interior. The guesthouse offers a relaxing sun terrace with outdoor furniture and a picnic area. The guest rooms come equipped with a private bathroom, a seating area, and a balcony. Guests can access the beach of Tavira Island through the summer ferry which is a 5-minute walk away, as well as explore the local restaurants and museums only 10 minutes away. 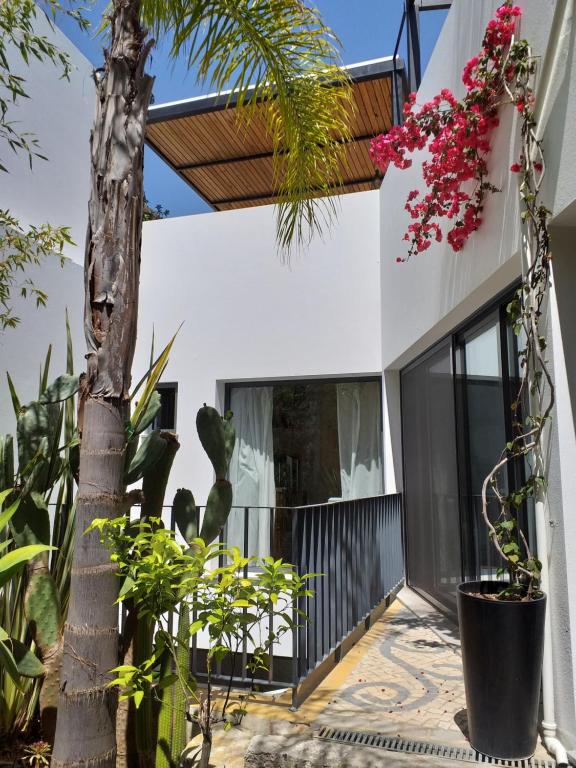 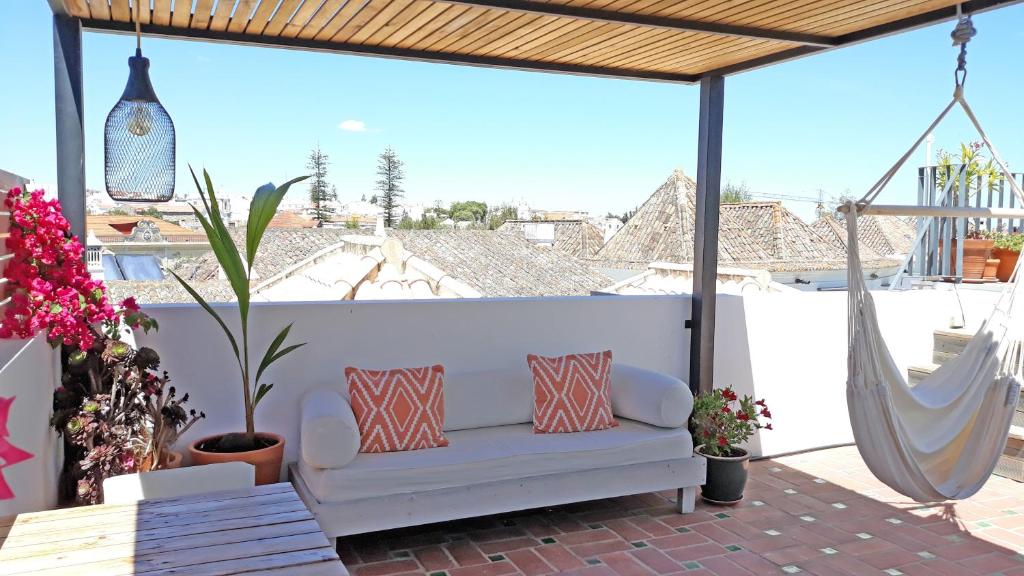 Less than 2 kilometers from Praia dos Tesos, Azul Sul is a quaint guesthouse of 400m2, renovated with local materials from the region. Azul Sul features an outdoor terrace with a comfortable seating area, as well as a relaxing garden. The guest house’s rooms come equipped with a seating area, a private bathroom, and a kettle, with some also having a kitchenette with a microwave. 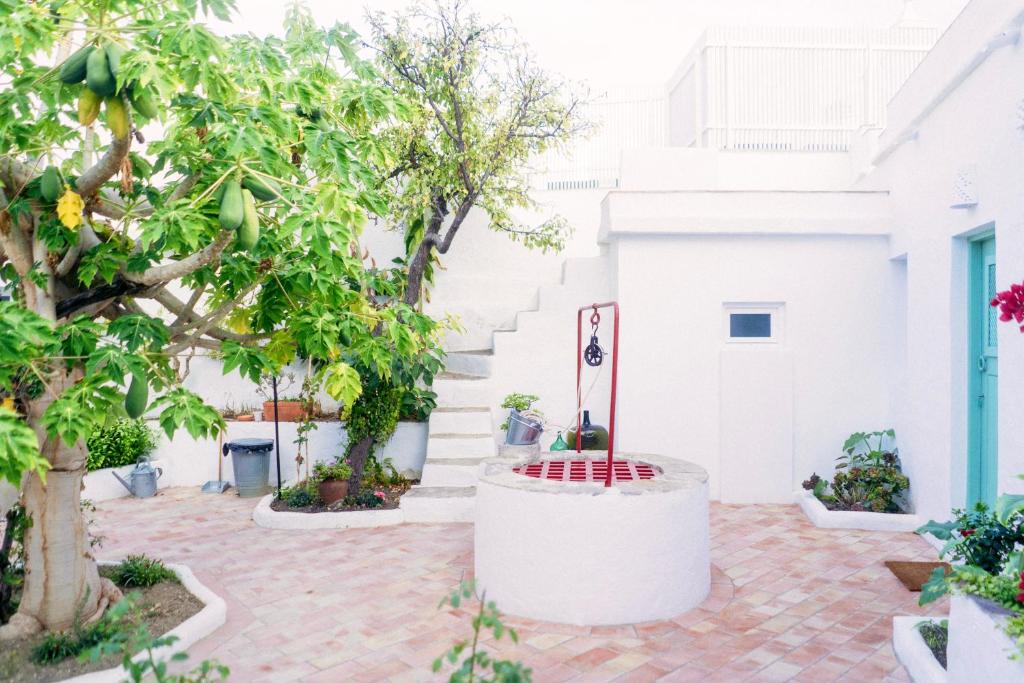 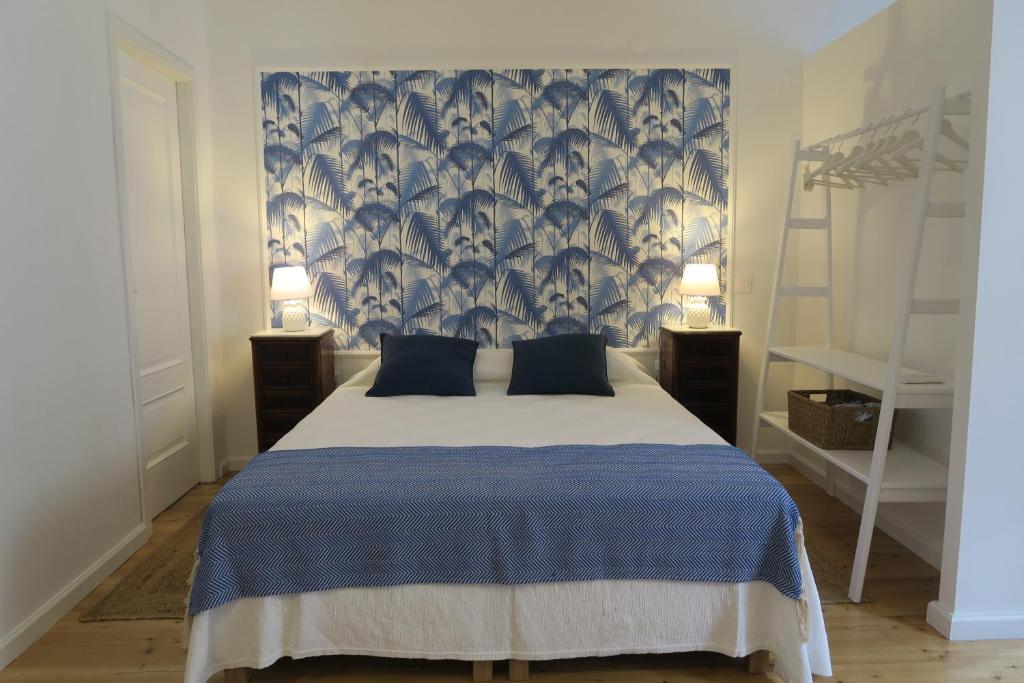