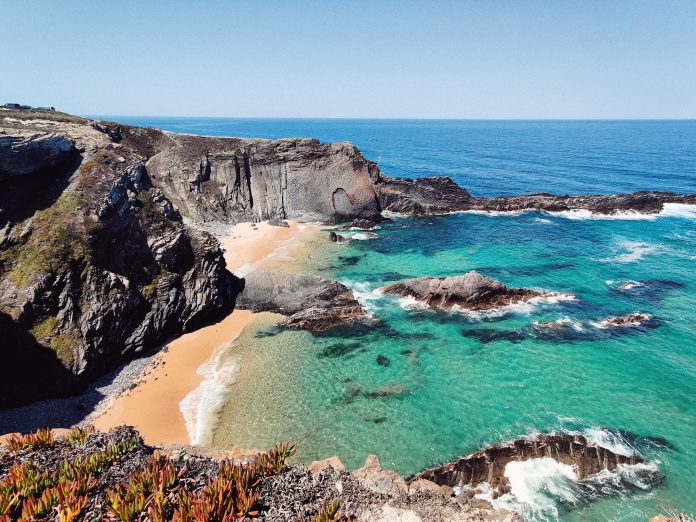 Situated above Algarve, the vast region of Alentejo is one of Portugal’s hidden gems. Even though you can find splendid beaches, rugged landscape, golden plains, rolling hills and some of Portugal’s best wineries, it is still little known to an outsider. Thus you have a chance to visit a little visited but enormously beautiful region to discover not just its nature and architecture but also its unique cuisine, traditional farming techniques, and its unique crafts, such as tapestry-making. Head to Alentejo to unearth Portugal’s most precious hidden gem.

Things to do in Alentejo

Travel to Evora, a UNESCO heritage site sitting in the north-east of Alentejo province. Its architectural landmarks include the 12th-century massive Gothic Cathedral of Evora, a Roman-built temple, and a narrow-laned historical city center featuring sites from every era, built by Celts, Visigoths, Lusitanians and Moors. Also, don’t miss out on Chapel of Bones, a house of worship lined with human remains or Almendres Cromlech, a Neolithic monument, known as Portugal’s Stonehenge.

Evora is not only an architectural treasure chest, it is also one of the best places to eat local Portuguese fare, for example in its pretty Moorish quarter, local foodies’ shrine and sample its heady wine. Also, don’t forget to buy Alentejo-specialty souvenirs such as cork, horn, leather, and tapestry.

One of the best places to escape the hustle and bustle of civilization is Monsaraz. Perched atop a hill and dominating the quiet-flowing Guadiana River, the town is a veritable open air museum with its labyrinthine cobbled lanes of wrought iron balconies and swinging street lamps, small 14th century churches; a medieval castle, and neat Montasaraz-only sun-bleached houses.

If travelling and summer and needing an escape from the summer heat, go to one of the town’s churches (it is cool inside) or travel to Praia Fluvial de Monsaraz, a smooth sand beach by a picturesque lake just five minutes away from the downtown.

Montasarz is one of the best places in Portugal to do star-gazing. Head to Observatorio de Loga Alquera to go completely moon-eyed with the marvels of the universe.

Pay a visit to Portalegre

The capital of the scenic Portalegre district, Portalegre is one of the most beautiful cities in Portugal. It is strewn with historical landmarks such as its stately cathedral, Se de Portalegre, a towering medieval castle, Portalegre Castle, and Sant Bernard Convent.

To pamper your sense of beauty, take pleasant strolls in Parque Natural de la Sierra de San Mamés, a protected mountain range with paths and great panorama, and visit the city’s many museums witnessing to the town’s artistic brilliance.

Portoalegre is known for its prime hand-woven tapestries. To uncover the work of its weavers, head to Museum das Tapecerias, a tapestry museum or Manufactura des Tapecerias, another site featuring the unique hand-woven Portalegre tapestries. Also, check out Museu Jose Regio, named after one of Portugal’s most famous 20th century authors, a native of the town.

Travel to the towns of Marvao and Castelo de Vide. Located a short distance from each other, the duo represents arguably two most scenic settlements in Alentejo.

Hill-perched Marvao is one of the prettiest places in Portugal. Included in New York Times’ 100 Places to See before You Die, it boasts not only a medieval castle with one of the world’s best views, but also a handsome Gothic Convento de Nossa Senhora da Estrela convent, and photogenic Santa Maria Church.

Note that Marvao is home to three great art events, an annual international festival of classical music taking place in July-August; Periferias international film festival, unfolding in August each year, and Al-Mossassa, a tribute to the town’s Moorish past.

If Marvao stands out thanks to its hill-top stunning vistas, ancient streets and outsized culture scenery, the walled medieval, somewhat parochial, Castelo de Vide has a similar laundry-fluttering feel, and a medieval castle just like Marvao, but has some unique sites such as its eye-pleasing Jewish Quarter, with its splendid museum. What is more it is also a great hiking hub.

Go trekking in Portugal’s mid-east Castelo de Vide region. The area is flooded in lush greenery. One of the best hiking trails in Castelo de Vide region is Over Povoa’s Fields. It is a scenic trek stretching 13.000 steps near Castelo de Vide. It is basically a loop path that will take you back to your starting point. Other trails include routes such as Povoa Outside, a 9.000 step route it takes you through its groves, and offers splendid vistas of the hilltop imposing castle, and the town’s slanted red-tiled roofs.

Note that Alentejo offers a host of hiking experiences of different level of difficulty. Whenever you go there will be a path to tread or cycle upon.

One of children’s pastimes is rock-pooling. Take your offspring for a day of rock-pooling or, if childless or travelling alone, awaken your inner child m and head there yourself.

Take a bucket and a net and go to Almograve, with its one-of-its-kind edge-of-the-world feel. Here you can not only catch crabs, shrimp and small fish but also splash around in its small pools. Note that the waves can be large so be careful.

Looking for more things to do?

Apart from its unique tapestries, great leather, horn and cork, it is also by right one of Portugal’s top wine destinations. Local wine has a rich bouquet and is a mélange of several Portuguese grape varieties including Argones (Tinta Roriz/Tempranillo), Alicante Bouschet and Alfrocheiro. But it is for sure its ambrosial fare that explains why Alentejo is one of Portugal’s most cherished hidden gems.

What to eat in Alentejo?

Try out Acorda, one of the region’s most popular soups. It is a herb-flavored broth with bread, and crowned with an egg. Its variations may contain shrimp or shellfish since Alentejo is still a maritime region.

Another local signature dish is Carne de Porco à Alentejana. It features pan-fried marinated pork, fried potatoes, and clams all steeped in garlic wine sauce. Even if it may have been first dreamed up in Algarve, since the pork is sourced in Alentejo it is named after the region.

Where to stay in Alentejo?

All towns of Alentejo feature good value accommodation which is more affordable than comparable offers in Lisbon or Algarve. It pullulates with campsites, and motels, while its larger towns, such as Evora also feature youth hostels.

When to visit Alentejo?

Even if summer months are the best for hiking, surfing, rock-pooling with its sun-drenched siesta hours being highly conducive to sampling mouth-watering Alentejo food and sipping its summer-perfect wine, other months are just as good.

You can travel to Alentejo for Christmas, with its magical Christmas markets, such as Jardim de Natal in Evora, and celebrations making December-January one of the best times to visit Alentejo. Also note that late February-early March is the carnival time. One of the best Alentejo carnivals takes place in Sines, a seaside resort, making Algarve in February-March a burst of vivid colors and extravaganza in your retina.

What makes Alentejo a true hidden gem is its size, great nature, stunning architecture, be it medieval or Roman, and of course its relative lack of tourism. Whereas some areas of Algarve are thronged with visitors in summer months, Alentejo remains a relative backwater with you being able to take pleasure in its authentic somewhat rural ambiance.

Is Portugal a Poor or Rich Country?

Getting a Mortgage in Portugal