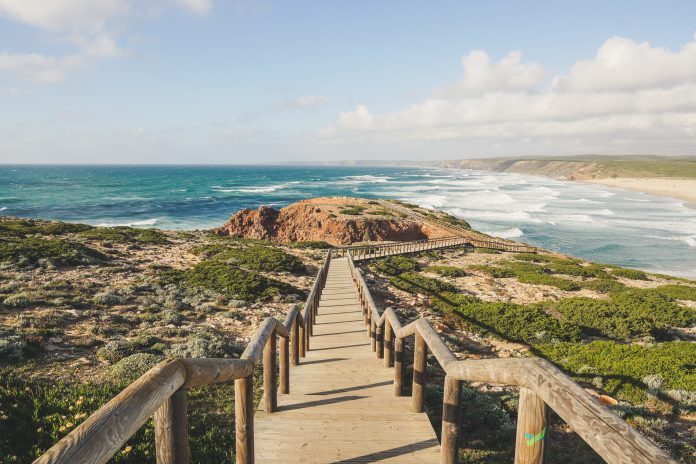 Have you ever dreamed of visiting Portugal? If so, travel to Algarve, where the soul of Portugal dwells. The region is located on Portugal’s south-western tip and is lapped by the Atlantic from two sides. It is known for its surfing, picturesque cities, local crafts, cuisine, golden sand beaches and natural marvels. Travel to Algarve to see for yourself Portugal’s most popular tourist region, with over 4m tourists travelling there each year.

Things to do in Algarve

Algarve is one of the best regions to visit in Portugal. It is not just its stunning nature with long stretches of fine golden sand and scenic rolling grasslands but also ancient port towns such as Faro and Lagos and an inland gem of a town, Tavira.

Faro, the capital of the Algarve region is largest among them. Travel to Faro, the pearl of Algarve. It features scenic old town, picturesque marina; ornate parks and plazas, kinetic atmosphere, and a wealth of food & drink options.

If travelling to Faro don’t forget to dive into the old town’s web of its serpentine cobblestone alleys with its many museums, houses of worship, yummy cafes, and stores selling pretty Faro ceramics. Also note that Faro boasts great beaches for you to combine sun-basking and site-seeing.

If doing both appeals to you, your next stop in Algarve must be Lagos, another city in Algarve which offers stunning beaches and a centuries-hallowed old town. Head to Lagos, one of the main sites of Age of Discovery’s marine excursions, lying along the Bensafrim River.

Here you will uncover a hilly townscape with a maze of beautifully cobbled lanes, lush greenery, great seafront esplanade, dynamic bar & restaurant culture and Lagos-only boutiques selling ceramics, crafts and decorations. To add to this, Lagos possesses splendid beaches and offers a wide choice of water sports, sailing trips, and even horse-riding. Take a plunge into your Algarve dreams in Lagos, one of the best towns to visit in Algarve.

Pay a visit to Tavira

But no trip to Algarve can be truly completed without a visit to Tavira.

One of the most picture-perfect cities in the Iberian Peninsula, Tavira sits on the majestic River Gilão.

It is not only home to great architectural landmarks but also a site of UNESCO Intangible Cultural Heritage of Humanity thanks to its unmatched Tavira diet. In fact it is the local gastronomical marvels that lure visitors from all the world to Tavira. If here, head to its old town to relish the mouthwatering fare at its bistros and fresh produce in its market, Mercado Municipal.

Nevertheless, don’t miss out on the many historical sites scattered around Tavira like the tumble-down castle on the hill, an ancient bridge built by the Romans and its eye-pleasing Renaissance and Gothic churches. What makes it especially pleasant to do site-seeing in Tavira is its shady gardens, squares, and streets; and an array of great hostels and restaurants to keep away from the midday heat if visiting in summer.

Did you know that almost 40 percent of Algarve’s territory is protected nature? But even if it is impossible to do regular tourism in most nature reserves in Algarve, you can take delight in their unrivalled natural beauty.

Head to Ponta da Piedade, a lofty promontory, just three kilometers south of Lagos. Here you can trek along a scenic trail, past picturesque Praia dos Estudantes, Praia do Pinhão, and Praia Dona Ana. On your way you will be able to see whole networks of grottoes, sandstone sea arches, and caves along with a one-of-its-kind seascape.

Getting there: From Lagos, take the road to Praia Dona Ana and continue on it right to the end.

If the rather short 2h and 6km hike at Ponta da Piedade is not enough, opt for a longer trek, which is just as eye-appealing. Hit the famous Don Quixote Trail starting at Cachopo, on the Caldeirao Mountain, near Tavira. The 17km path will take you through the beauteous Tavira countryside. It is noteworthy for the changing landscape along the way, where vineyards alternate with fruit gardens, oak forests, pine groves, and scrub, with mind-blowing vistas over the meandering Odeleite River.

Getting there: After you make it to Cachopo, turn in the direction of Tavira. After 1km, search for the left-hand sign to Casas Baixas. The trail begins at this village’s Discovery Centre.

The wild West Coast of Algarve differs strikingly from its somewhat touristy southern extremity. Here you can not only find pristine nature, but also great surfing opportunities.

One of the best places to ride the waves in Portugal is Arifana Beach, situated on Portugal’s Western seaboard. Located 6km south of Aljezur village, it is known for truly wicked rollers. Park your car at the top of the steep escarpment and take the narrow path down to the beach.

If looking for something more “scaled up”, go to beautiful Amado Beach, which features several surf schools. Note that the beach is super long so you will have plenty of room.

Note that Algarve offers a number of other surfing locales with Beliche, Praia de Faro, Zavial and Tonel just being just the most well known.

What is special about Algarve?

One of the things that make Algarve stand out is its townscape and tradition of decorating houses. The inhabitants of Algarve have for centuries prettied up their chimneys to show their unique character, status and good taste. So, if walking around an Algarve town, have a look at the chimney: it will tell you a lot about the owner of the house. Also, the locals love to put up plates on their facades, with the same purpose.

It is not just the exteriors of its houses that are special about Algarve. Algarvienses are known for producing one-of-its-kind Algarve pottery with many towns having their own unique ceramics. While pottery is by far the most popular souvenir to bring from Algarve another regional export is empreita, or hand-made palm leaf accessories.

What to eat in Algarve?

One of the musts to do in Algarve is to eat Conquilhas a Algarvia. The juicy clams, just from the sea make this signature Algarve dish especially delectable. The ingredients include fried onions, garlic, sliced Portuguese sausage, and clams, all this garnished with parsley and coriander.

Another Algarve specialty is cataplana. A cataplana is a Portuguese cooking vessel, most widespread in Algarve used to cook traditional Algarve dishes. The cooking item gave name to the dish itself, so one of the best things to eat in Algarve is also called cataplana.

Apart from ambrosial cataplana with prawns and chourico, there are plenty of others, such as cataplana de marisco, a tribute to lobster, clams, squid and whatever else is the catch.

Order a cataplana at one of local Portuguese restaurants, and taste the briny tang of Algarve.

Where to stay in Algarve?

Faro, Lagos and Tavira offer a wide variety of accommodation. In all three cities, downtowns offer good value and plenty of bars, restaurants and cultural sites. If travelling outside of large cities keep in mind that Algarve has a lot of camping sites, including on its western coast, and motels.

Note that it is possible to travel in Algarve on the shoestring. Go to Algarve in low season or use the great bargain platforms such as Airbnb, Agoda and Booking. They are widely used and can often offer hefty discounts.

When to travel to Algarve?

Travel to Algarve in April-June if you are planning on swimming, cycling or hiking. Going to Algarve in September-October is also pleasant thanks to mild temperatures hovering around 20°C. Note that May is the most windy month with strong gusts reminding you of the proximity of the Atlantic.

Remember that Algarve is home to one of its kind Carnival which starts a week prior to and continues through Fat Tuesday, in 2022 falling on March 1.

Algarve is one of the most popular regions of Portugal thanks to its sun-lit beaches and ancient towns with their vibrant bar & restaurant scenery. Despite this fact, there are still plenty of little known destinations and its Western ocean board features nonpareil pristine nature, marvelous stretches of sand, and some huge waves, sometimes rippable, sometimes barrels . Head to Algarve, to uncover the spirit of Portugal and find a place your heart will surely call home