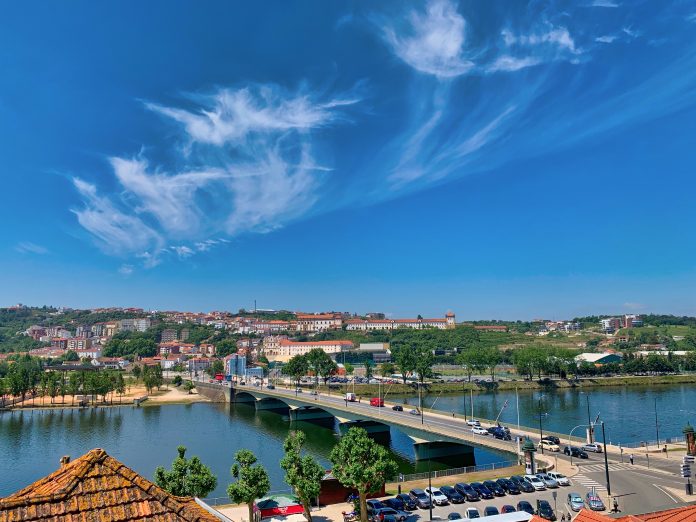 The historical importance of Coimbra is massive, it’s one of Portugal’s oldest cities, since Roman times, this city was already an important location.

Coimbra was once the proud capital of the Portuguese nation. It is located in the center of Portugal, Coimbra is often called the City of Knowledge since its home to the oldest University in Portugal, the symbol of excellence, and classified as World Heritage.

The best way to do your journey to Coimbra is on foot because the city has two zones, the upper section (Alta), where you can find the University, Joanina Library, and Sé Velha, and the lower section area (Baixa), the old part of the town which is more commercial with restaurants, and tiny tascas (budget eateries).

What to do in Coimbra

Visiting Coimbra and not visiting the University is like going to Rome and not seeing the Pope. To get to the university, start from the Almedina Tower, the entrance gate forming part of the wall that surrounded the old city situated in the lower section of the city. Here, you can explore the alleys that date back to the 8th century.

Keep on walking and from here you will have to “climb the mountain” through a staircase from Rua de Quebra Costas (built to get from downtown to uptown) to the Sé Velha square.

Here, you can visit The Sé Velha (Old Cathedral), a church that resembles a fortress financed by the first king of Portugal, Afonso Henriques.

If you keep going you will reach the University grounds and access the Patio admire the view over the Mondego River and get a panoramic view over all of town! One of the most popular attractions of this Area is the Joanine Library, a Baroque library situated in the center of the University of Coimbra, by the university tower.

The library was built in the 18th century and it is considered a national monument with priceless historical value. There are thousands of works that lay upon a lavish space full of beauty and exoticism, where the richness of the painted ceilings is in harmony with the balustrades and shelves made of golden leaves and wood from the tropics.

Continue your walk through the University buildings, passing by the Faculty of Medicine and others. You can also visit the New Cathedral (Sé Nova), originally a Jesuit church built slowly over a hundred years which stands out against another point of interest, the Machado de Castro National Museum, famous for its collections of paintings, sculptures, goldwork, and tapestries, as well as for the elegance of its panoramic Loggia which rests on an amazing Roman crypt, the precious remains of Civita Aeminium Forum.

Before returning to the lower part of the city (always on foot, obviously!), you can’t miss the botanical garden, one of the oldest gardens in Portugal!

With 13 hectares of beauty, the garden was established in 1772 by the Marquis de Pombal with the purpose to supplement the study of medicine and natural history at the University of Coimbra as medicinal plants were grown and exotic species, brought back from Portugal’s overseas colonies, were planted.

The garden is situated adjacent to the Aqueduto de São Sebastião (San Sebastian Aqueduct), built over what was once a Roman aqueduct in the 16th century. It is thought the prolific Italian architect Filippo Terzi had a hand in its construction. The graceful arches of the aqueduct carrying water into the city helped to fuel the city’s growth at the time.

Now you can start your descent from the Alta to the Sofia region, or Coimbra’s Baixa. While there, be sure to visit the Santa Cruz Monastery. This monument gained the status of National Pantheon, as it is where the first two kings of Portugal are buried.

From here you can walk towards the river, through a small square with a lot of small stores and traditional commerce. This small square opens to the river and Santa Clara Bridge (used by pedestrians to get to the southern bank from the old town center).

It was once the gateway to the city and is where you can see some of its most beautiful buildings, like the iconic Astoria Hotel and the local headquarters of the Bank of Portugal. From here you can see Santa Clara’s Bridge that spans the Rio Mondego, one of the oldest of the three bridges crossing the river in the city.

After crossing, you can’t miss the Convent of Santa Clara. This monastery was built in 1314 by Queen Saint Isabel of Aragon and it is a fine example of the architecture of that period, being notable for the size of the church and cloister and the stone vault that covers the three naves of the church.

Because of its location on the banks of the River Mondego, the convent was subjected to frequent floods that led to the building of an upper floor and the abandonment of the almost permanently submerged ground floor.

It is also important to mention that this monument area gives access to City Park, an extensive green area by the Mondego River ideal to take a break, while here enjoying the peace and quiet, don’t miss out on the Pedro e Inês bridge footbridge, a bridge with a cool and clever design that offers an amazing view over the university and the whole town.

Also, if you have children, or even if you don’t! You have to visit Portugal dos Pequenitos, a miniature park with reproductions of national and other countries’ main landmarks.

Finally for our last attraction, Quinta das Lágrimas. This estate has been the setting for the forbidden romance between King D. Pedro I and Inês de Castro. The gardens have a canal, “Fonte dos Amores”, that according to legend transported love letters between the Estate and the Royal Palace. According to history, the same waters were turned red by the blood of D. Inês who was assassinated here and according to legend, the marks of her blood can still be seen on the rocks.

Where to Stay in Coimbra: 5 Best Hotels in Coimbra

A 5-star hotel, Hotel Quinta das Lagrimas is located in a historic medieval palace that was recently renovated. Featuring botanical gardens and a luxurious spa with views of the city, as well as a 9-hole golf course, this hotel has all the facilities you need. The 2 restaurants at the hotel serve seasonal dishes with local ingredients. There are 3 room types at Hotel Quinta das Lagrimas: palace rooms that once accommodated the Duke of Wellington, garden rooms that overlook the botanical gardens, and spa rooms with a hydrotherapy bathtub. 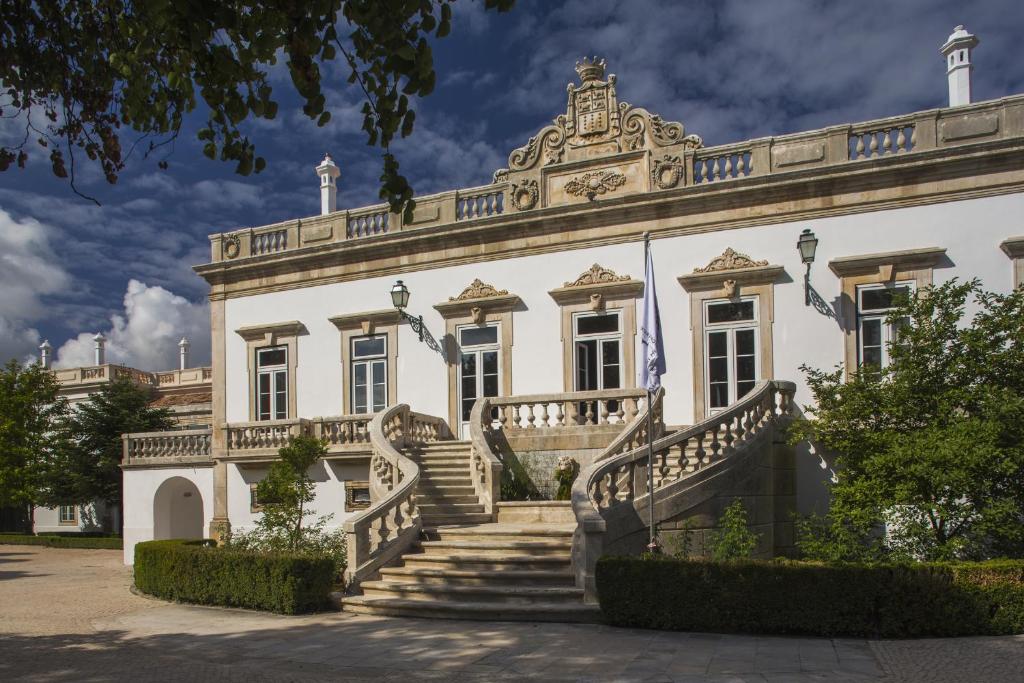 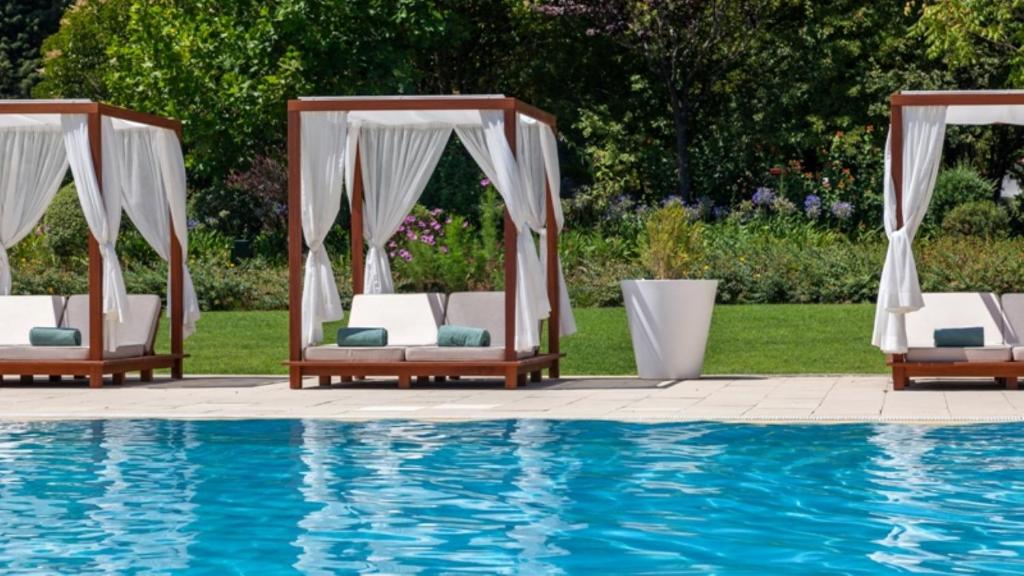 Located in the heart of Coimbra, only 400 meters from the University of Coimbra, Solar Antigo Luxury Coimbra is a 4-star boutique hotel that features views of the city. A historical building, its traditional architecture has been kept intact, while including all the modern amenities necessary for a comfortable stay. The hotel features rooms and apartments, as well as a suite with a private pool. The units come equipped with air conditioning, a flat-screen TV, a private bathroom with free toiletries, and a stovetop. 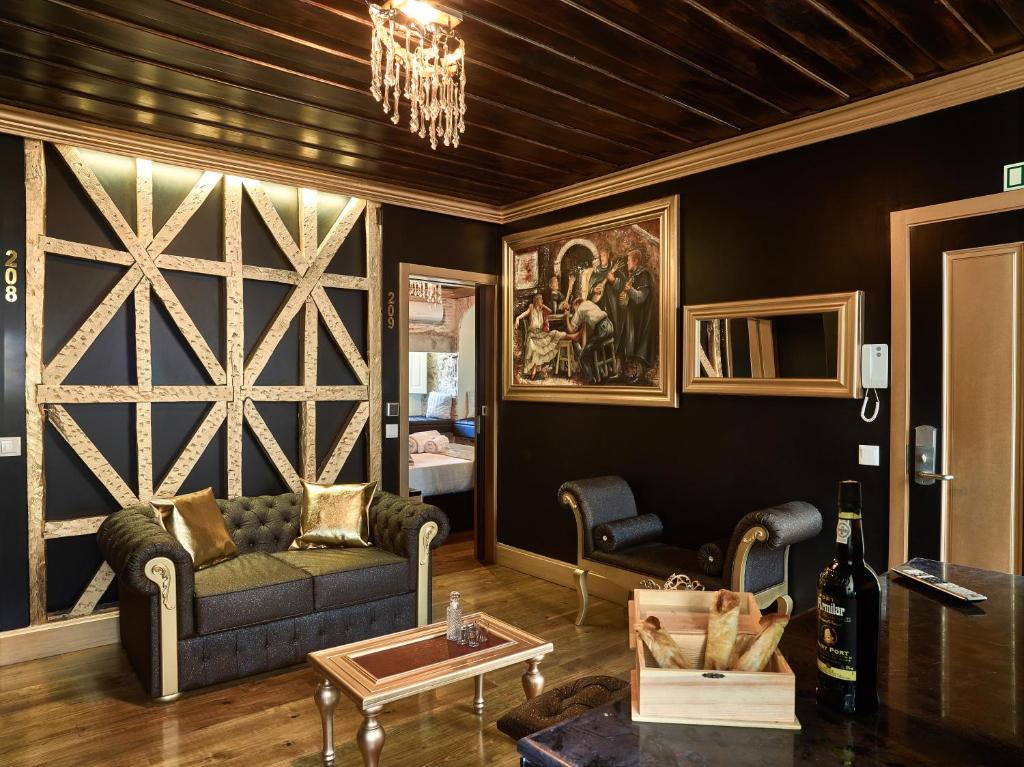 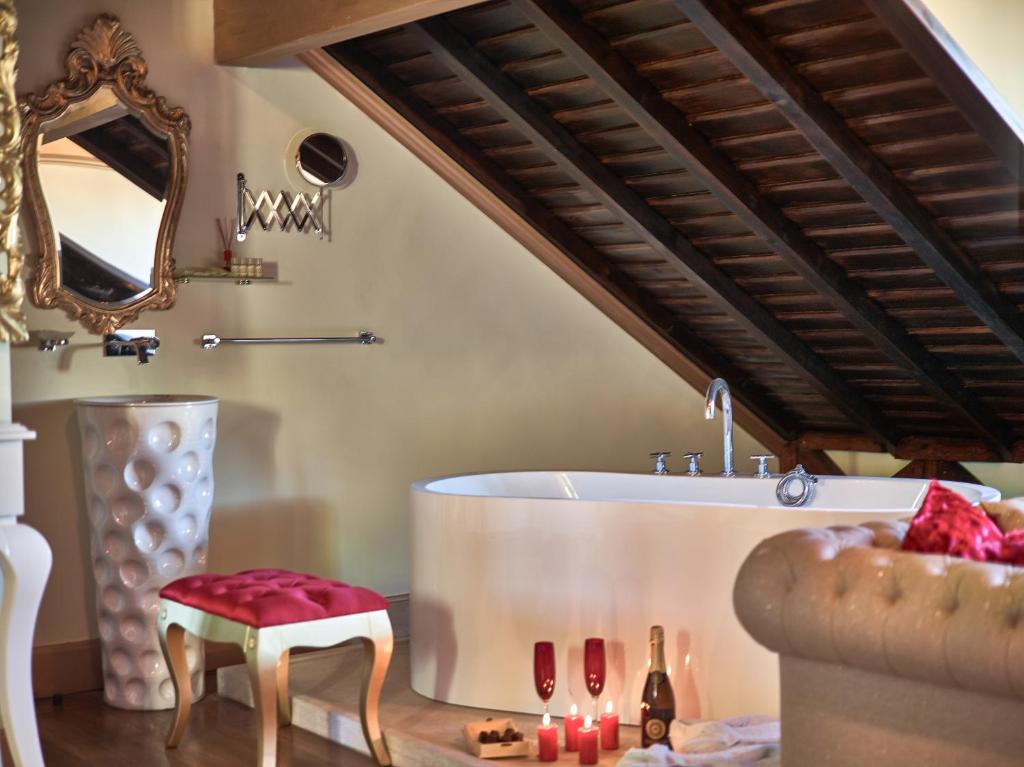 Tivoli Coimbra is a 4-star hotel located in the historical center of Coimbra that features a modern shared lounge with the Simone Coffee Shop, where a barista can fix you up a warm cappuccino. The staff offers 24-hour service and helps you arrange rental cars and tours of the city. The bright rooms feature large windows to let the light in, a comfortable seating area, a minibar, and a flat-screen TV. 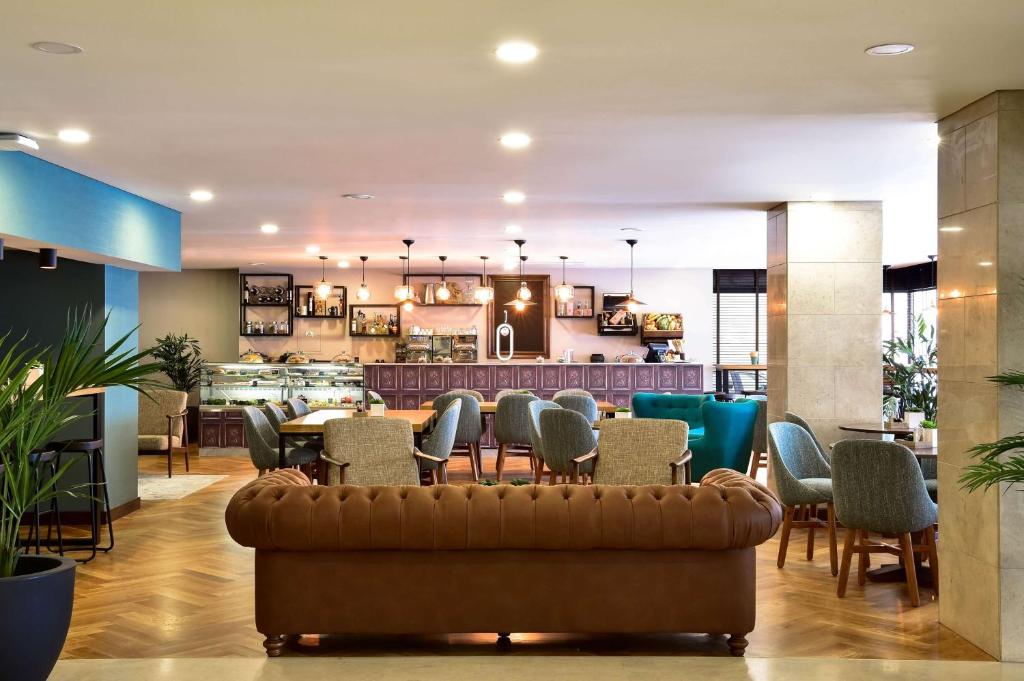 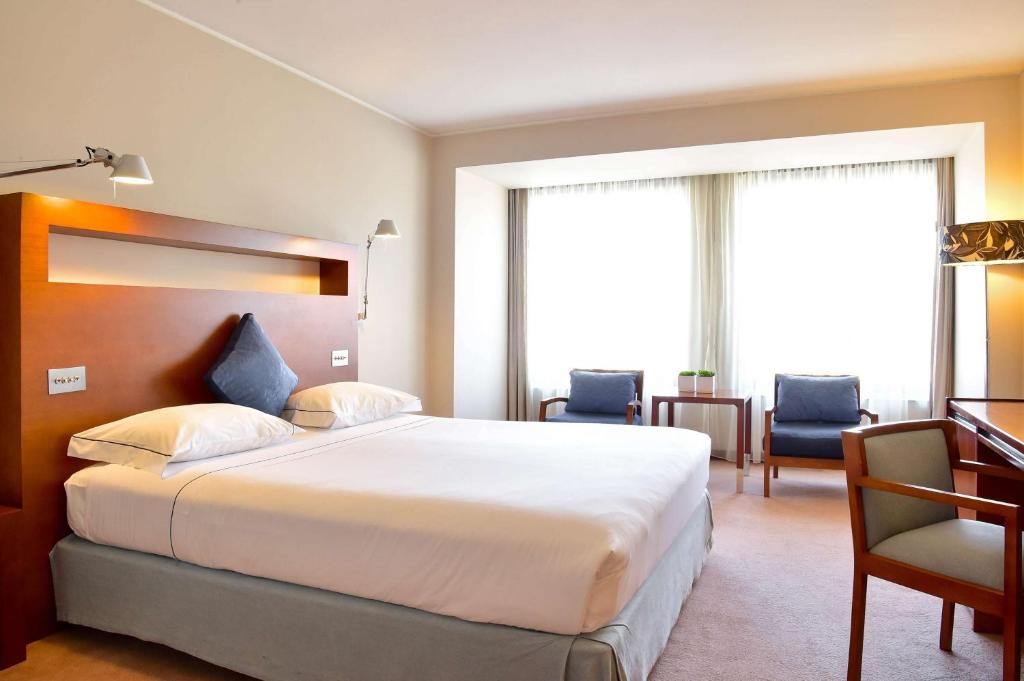 A 4-star hotel, Sapientia Boutique Hotel is located in the heart of Coimbra, 400 meters from the University of Coimbra. With a stunning rooftop terrace to watch the sunset over the city and modern rooms, guests rate this hotel very positively. This place features a restaurant, bar, and terrace, as well as comfortable family rooms. The rooms come equipped with air-conditioning, a flat-screen TV, and a private bathroom, while some also feature a kitchenette. 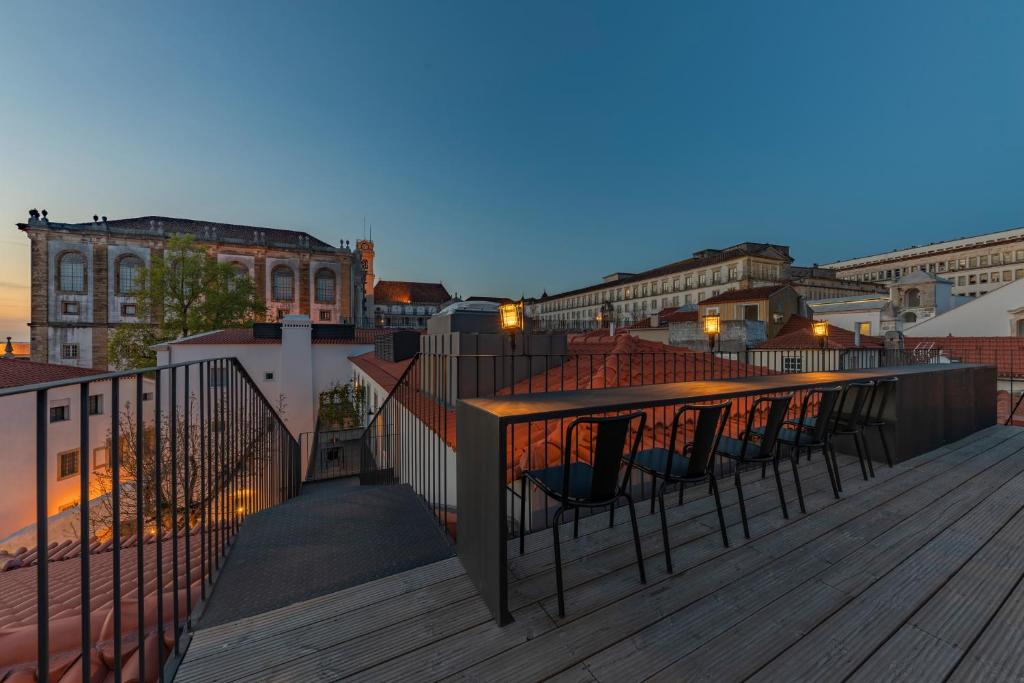 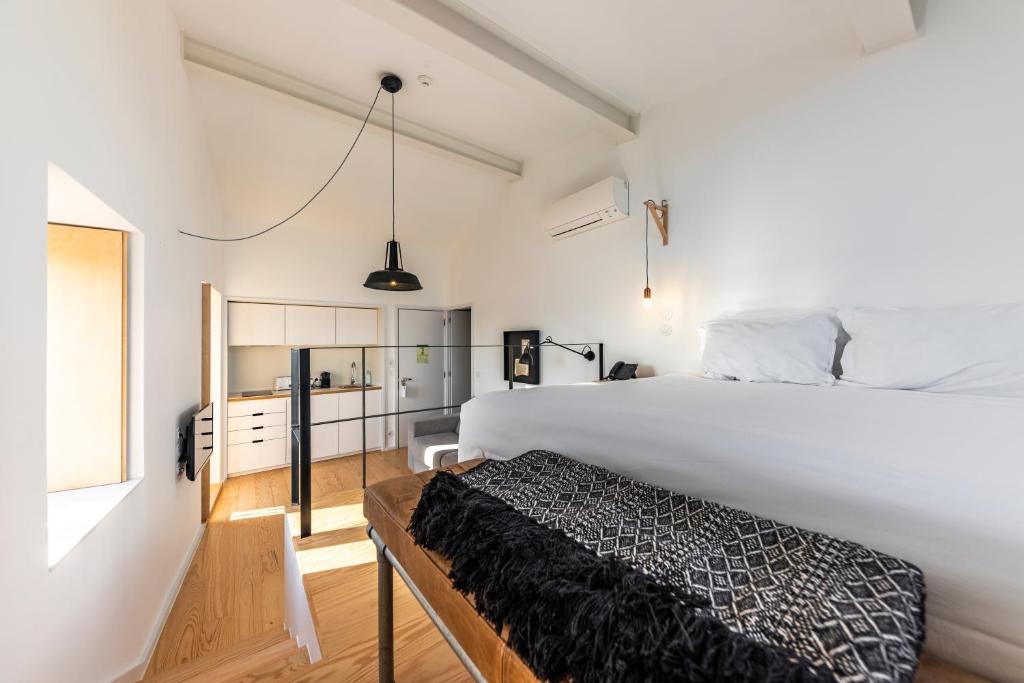 A 4-star colonial-style house, Quinta da Granja features one-bedroom New York-style cottages surrounded by forests. This place has a large garden with 18 different fruit trees and a kitchen garden with fresh organic fruit and vegetables from the garden. The outdoor swimming pool overlooks the village of Lobazes and the grapevine patio. The units come with a private pool, a fully equipped kitchen with a dishwasher, and a private bathroom. 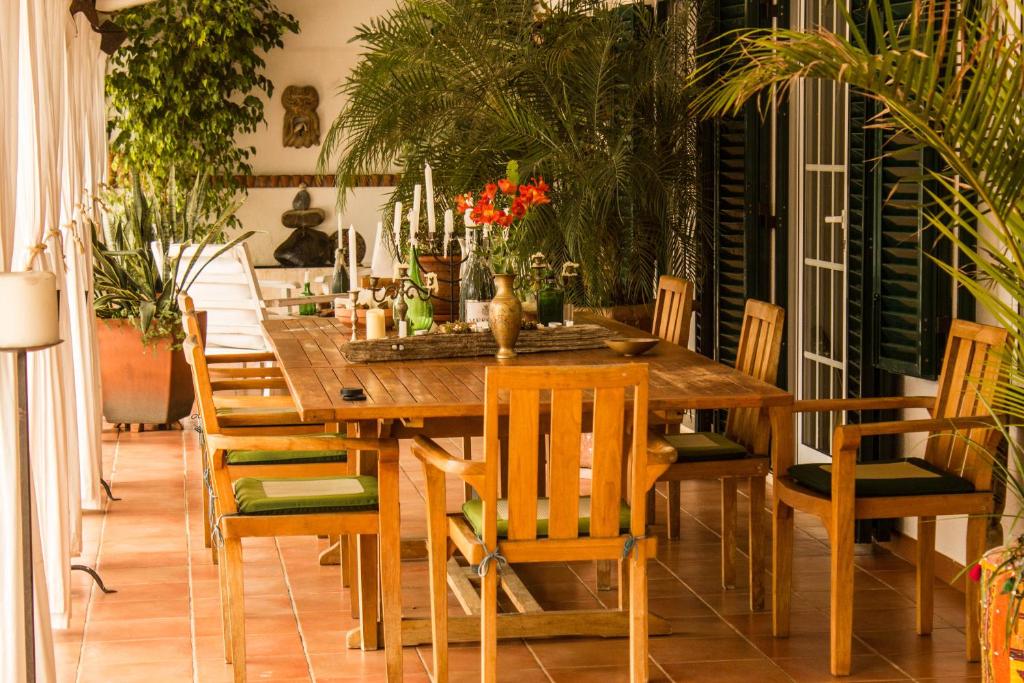 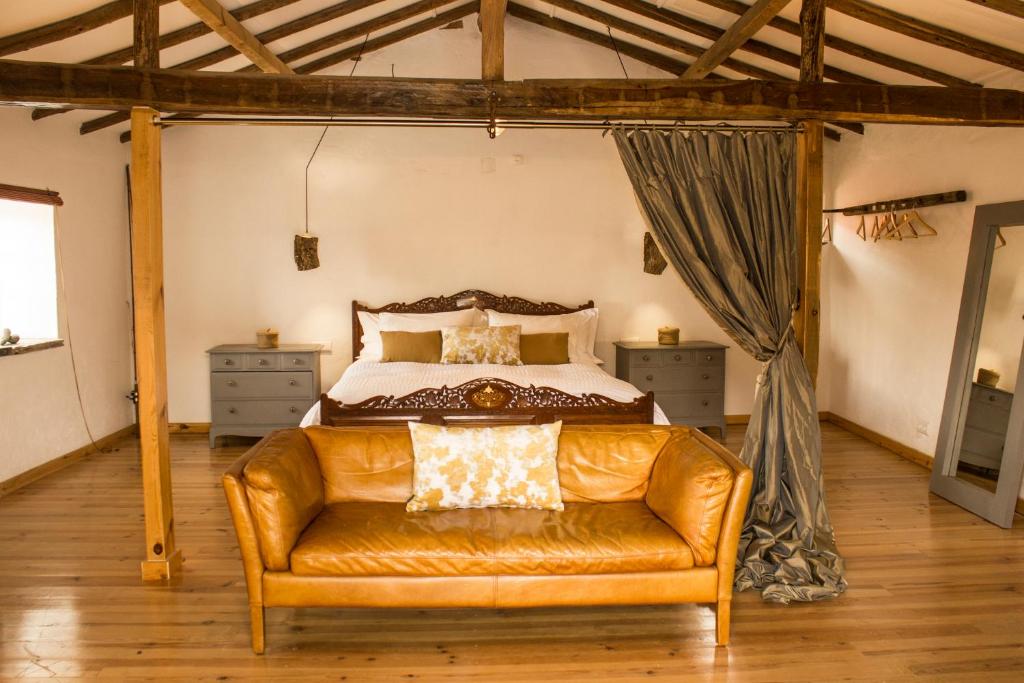