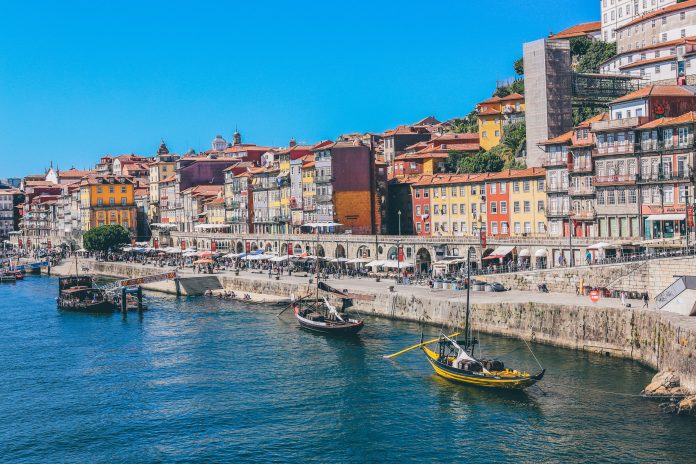 Travel to the North of Portugal to uncover its tranquil ambiance of a midday siesta and its scenic landscape and townscape. Centered around the picture-perfect Porto, the North of Portugal offers a trunk full of hidden-gems such as Vila Nova de Gaia, a little known pearl of Northern Portugal; Braga, the spiritual centre of the Iberian Peninsula, and the medieval gem of a city, Guimaraes. Head to the Northern Region to delight in some of the best locales in Europe.

What to do in Northern Portugal

Whereas most people have heard of Porto, the unbelievably photogenic capital of Norte Region, the region boasts a number of cities that are relatively unknown. One of them is Vila Nova de Gaia, a small town sitting on the banks of the majestic Douro River. Situated a short car ride from Porto, it offers better accommodation prices, great food & drink scenery, and one-of-its-kind architecture with landmarks like magnificent Mosteiro da Serra do Pilar, a hilltop park with cable car, slender whispering palms and great views, Jardim do Morro and great sandy beaches like Praia da Madalena.

Pay a visit to Porto

The world-famous city of Porto is arguably the best place to start your Norte Region journey in. Elected the best European destination in 2014 and 2017, it boasts not only a beautiful old town, lush parks, dynamic bar & nightclub scenery, but also its famed ambrosial cuisine, and splendid beaches some of which can even be reached by metro. The main landmarks comprise Luis I Bridge, with its gob-smacking panoramas, a centuries-hallowed Palácio da Bolsa and Cais da Ribeira, dotted with historic sites, stores and eateries offering highly delectable fare, one of the best spots to soak up Porto’s authentic charm.

Don’t miss out on Port wine, a punchy tipple that the region of Porto gave its name to.

Another destination to visit in Norte Region is Braga, Portugal’s third largest city with pedestrian-only narrow alleys, splendid baroque churches, and picture-perfect city squares. The perpetual clinging of its bells creates a unique Braga ambiance reminding one of Braga’s ancient roots. For you to uncover more of its unique spirit head to its downtown with a one-of-its-kind Braga Cathedral, the seat of Primate Archbishop of Portugal and Spain, known for its eerie gargoyles and elaborate ribbed vaulting.

Note that the scenic city center pullulates with a wide variety of good value eateries and great wine bars. Sit at one of them and enjoy the melodious chiming of Braga’s churches’ bells.

Make your way to Guimaraes

Guimaraes is a medieval jewel of a town. Its old town ranks among the world’ best preserved medieval quarters: which is why Guimaraes is listed as a UNESCO heritage site. Head to its downtown, a veritable open air museum, and plomp down at one of its cozy bars and restaurants. Note that its prime landmarks include Guimaraes Castle, an 11th-century fortress looming large over the town; Paalaca Duques de Braganca, a grand former ducal residence housing a history museum (featuring tapestries, furniture, and arms) and its magic Largo da Oliveria, a cobbled plaza with a mind-blowing Gothic church.

One of the best things to do in Portugal’s Norte Region is to go hiking. Trekking locales include scenic riverine hikes, lakeside paths, and wonderful forested options. But arguably the best of them is Passadicos do Sistelo. It includes not only great views, but also a chance to walk along the quiet flowing Vez River on a great wooden walkway and gives you a feeling that you are in fact strolling through a palace built from lush greenery.

Note that apart from Passadicos do Sistelo, the Norte Region offers other prime hiking routes such as Vinho Verde trail, a splendid hike offering a chance to try out the ethereal local wine in a truly idyllic setting; and stunning Trilho do Rio Febros, and Ecopista-Liha do Tamega being also among top Norte Region treks.

Go surfing in the Northern Coast

Long considered an ugly duckling, and largely eclipsed by Nazare’s world famous Praia do Norte and Lisbon’s Costa de Caparica, Northern Portugal has one the continent’s best waves. The rugged terrain hides some of the most surfable waves on offer. If Lisbon and Central Coast offer great left-handers and peeling right, the Northern seaboard features randomly breaking waves with “rollers breaking like in artificial wave pools, making it possible to surf closeouts on a daily basis”.

One of the best locales to surf on the Northern Coast is Porto-Matosinhos. Head to Porto-Matosinhos, Portugal’s only beach that you can visit by subway. It lies close to Porto, the capital of the Norte Region, making it possible to hop back to town to enjoy an after-surfing glass or two of the heady Porto.

What is special about Northern Portugal

One of the things that make Norte Region truly special is Port wine, a heady brew that made Porto so famous. Named after the area around Porto, the fortified wine is sourced in the adjacent Douro River Valley. It is characterized by a sweet taste that blends heavenly with a good Portuguese dessert such as Pastéis de Nata, or Portuguese Egg Tart. Head to the Douro Valley to sample the fresh vintage of Port wine and then go on a tour of the old town, one of the best things to do in Porto.

Also, you can check out the unique crafts of Region Norte such as ceramics and its artisan leather.

Where to stay & eat in Northern Portugal

Where to stay in Northern Portugal?

Northern Portugal is strewn with great spots with choice accommodation options. Go for a stay in the historical downtowns of Porto, Braga, Guimaraes or Villa Nova de Gaia. Like this you will not just profit from a vast choice of low-cost options, and great food & drink establishments but also enjoy the scenic townscape, which will make your journey a veritable homage to beauty. Also, keep in mind that the North of Portugal is rife with great camping sites, motels and even surfing hostels like Oporto Surf World.

Your trip to Portugal really can’t be completed without tasting the local North Portugal fare, a treat to your taste buds. Munch on traditional Queijo da Serra da Estrela, Porto-unique runny mountain cheese, or indulge in the mouth-watering Easter meat loaf known as Folar de Chaves originating from Chaves, one of the best locales to try it. Also keep in mind that Portugal is known for its ambrosial meat and don’t forget about the heavenly egg-tart.

When to visit Northern Portugal

For sure visiting Portugal in summer is your best bet if you plan on cycling, hiking or surfing, but travelling in other seasons can be just as good. Winter months are known for their great Christmas markets, religious processions in cities such as Braga, whereas February-early March is when the great “Fat Friday” carnival takes place.

Note that the grapes from which Port wine is made are harvested in September, proving the wisdom of one of Portugal’s most beloved proverbs “August matures. September harvests”, making it the perfect month to visit the North of Portugal for a wine lover.

Portugal is one of the best countries to visit in Europe. Its much prized cities such as Porto, Lisbon or Faro are veritable tourist magnets . But if travelling in the high season it can feel thronged at times. North of Portugal offers a lot of quieter towns and cities to just kick it back and start exploring its architectural, cultural, gastronomical and more hedonistic marvels such as its fragrant fortified wine.

8 Things to Do During Your First Week in Portugal