Cost of Living in the Azores: Sao Miguel Monthly Budget

The largest and most populated island in the Azores, São Miguel is known as the Green Island due to its beautiful forested terrain and large lakes. Many visit the island and fall in love with it, leading them to seek to move here short-term or more permanently.

The island has around 140,000 inhabitants, with 45,000 people residing in Ponta Delgada, the island’s largest city.

Is it expensive to live in the Azores? What is the cost of living like in the Azores? Every island in the archipelago is different, but generally, it is more affordable than living in most places in mainland Portugal, especially Lisbon and Porto.

Consumer prices, including rent, are around 17% lower in Ponta Delgada, the capital of Sao Miguel, than in Lisbon. Restaurant prices are around 6% lower, and grocery prices are almost 4% lower.

If you’re considering Sao Miguel as a permanent or temporary home, let’s take a look at the average monthly budget for expats without children, families, and digital nomads in the capital of Ponta Delgada.

Cost of Living in Ponta Delgada, Sao Miguel for an Expat

The monthly budget for an expat in Ponta Delgada, Sao Miguel is less than €1000.

A one-bedroom apartment costs around €600. If you are looking for a larger apartment, this could cost around €900.

A monthly transportation pass is around €40 or less for buses. Utilities cost around €100, including phone data and cable TV which is a lot cheaper than in mainland Portugal.

For exploring the island and eating out at your favorite restaurants, budget around €150 a month. You can easily spend less or more, depending on your lifestyle.

Groceries for a single person average out at around €40 a week.

Health care could add to your monthly budget in Sao Miguel. EU citizens with a valid European Health Insurance Card can use the National Health Service (SNS) for free for up to 90 days in Portugal. This allows them time to get registered as legal residents to continue using the public health system.

However, non-EU citizens are only entitled to use the public health system if they are employed and pay social security in Portugal, having to be registered as legal residents as well.

Even if this is the case, they must purchase private health insurance to cover medical care before arriving in Portugal and becoming a legal resident.

Cost of Living in Ponta Delgada, Sao Miguel for a Digital Nomad

The cost of living in Faro for a digital nomad is at least €950 a month. This is the case if you sleep in a hostel’s dorm and cook most of your meals. If not, expect to need at least €2,200 a month in Ponta Delgada.

Budget at least €200 for leisure such as eating out, bars, and tourists to discover the island.

Food can easily max out your monthly budget. If you want to save and have a kitchen at your disposal, a weekly shop shouldn’t cost more than €40.

However, if you plan to eat out, an affordable meal is around €8. This would set you back around €700 in a month. 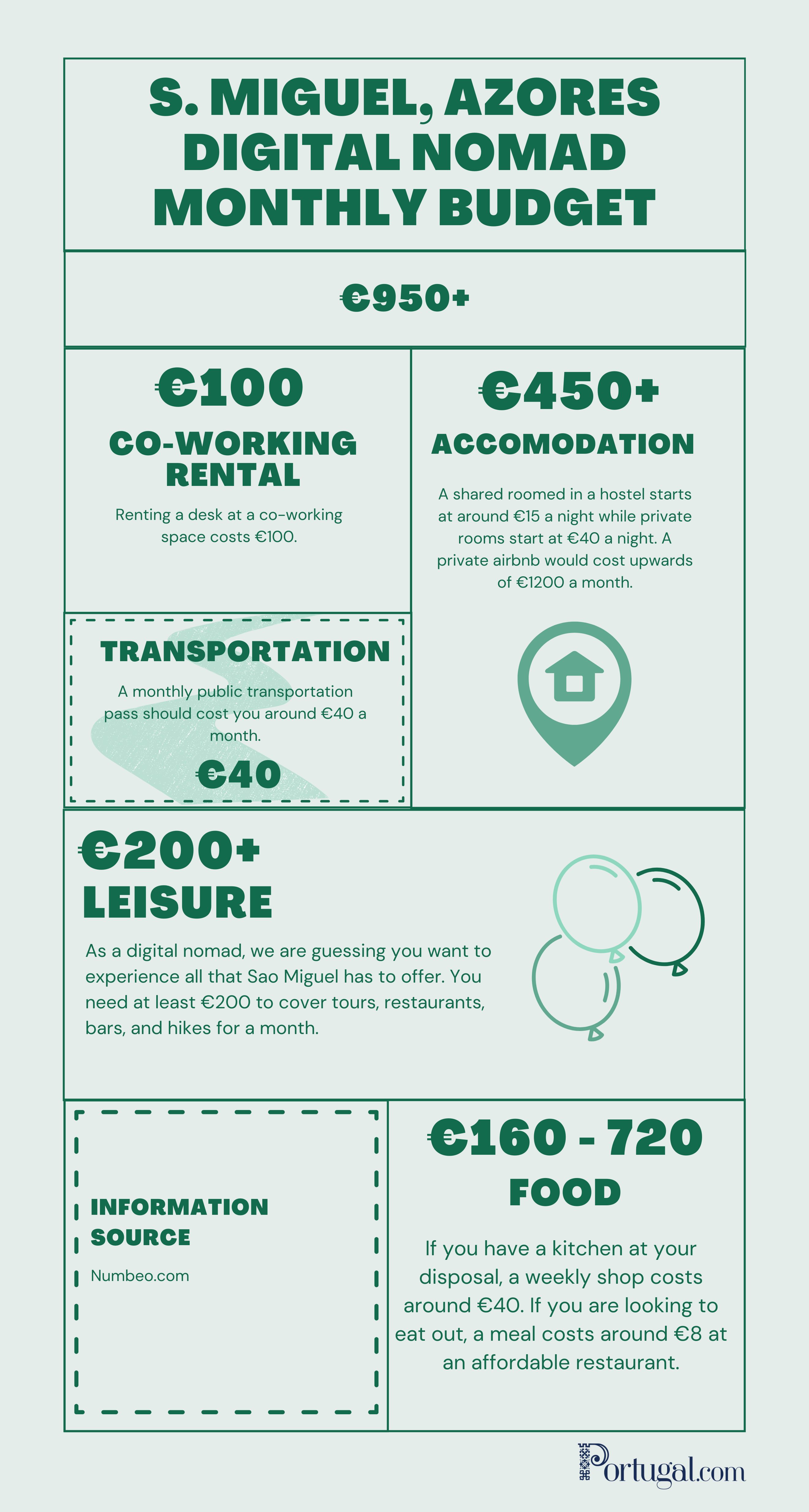 Cost of Living in Ponta Delgada, Sao Miguel for a Family of Four

This last Azores monthly budget for Sao Miguel is the most expensive because let’s be honest, so are kids. Expect to spend at least €2000 a month for a family of four in Ponta Delgada.

However, if you need health insurance for the entire family and your two kids will attend private school, you will spend over €3000.

A three-bedroom apartment in Ponta Delgada will set you back around €900. However, prices can go up to €1200, depending on the apartment type and amenities.

Budget around €160 a month for monthly transport passes. However, it is more convenient for a family of four to own a car and drive around the island. Fuel will cost you anywhere between €150 and €250 a month.

Utilities cost around €120 and include electricity, heating, water, etc. However, this can be much higher in the winter or depending on your family’s consumption.

Groceries for a family of four in Ponta Delgada should cost around €100 a week, so budget at least €400 a month.

If you need to purchase health insurance for the whole family, this will cost you at least €200 a month.

However, you might be eligible to use access to healthcare for free, even if you are not an EU resident. Non-EU citizens are only entitled to use the public health system if they are employed and pay social security in Portugal, having to be registered as legal residents as well.

While public schools are free, private schools can cost anywhere between €300 and €500 depending on the establishment and age of your child. You could pay around €1000 a month for two kids just for education.

Guide to the Azores