A city in the stunning region of the Alentejo, Beja has a small population of under 50,000 people. Beja sits on a 900 feet hill, overviewing the plains of the Baixo Alentejo. As Beja has not yet been discovered by mainstream tourism, it is the perfect place to go for a quiet but traditionally Portuguese trip.

Beja has an incredibly rich cultural heritage and history which can be seen in its architecture. The town was inhabited back in the Celtic times and later named Pax Julia by Julius Caesar in 48 BCE. The Visigoths also took over Beja at one time, but it was then taken by the Umayyad army in 713. It was named Baja in Arabic, which eventually became Beja!

In 1910, Christian Kings began fighting to conquest Beja. However, it was only retaken by the Portuguese in 1162 by Fernao Goncalves who led the army of King Afonso I. It was lost again around ten years later and remained under Muslim rule until 1234 when it was recaptured from the Moors by King Sancho II.

From Roman ruins to medieval castles, the activities in Beja that tourists seem to enjoy reflect this interesting history. If you are planning your next trip to Beja, keep this guide with you. We have selected the 5 best things to do in Beja, as well as our top picks for hotels and restaurants.

5 Best Things To Do in Beja

A medieval castle, Beja castle was built somewhere between the beginning of the third century and the end of the fourth century. The castle was made a National Monument and is the heart of the city of Beja. Open to visitors every day and at an affordable ticket price, this is a must-see.

Beja castle offers the best views of the city in every direction in the Torre de Menagem, a tower made of marble 40 meters tall. The castle reflects the Gothic and Manueline architectural periods with its distinctive style.

This castle is highly historically significant, particularly for its role in the Reconquista from the Moors. The castle was first conquered from the Moors by King Afonso Henriques in 1159. Along the years, modifications were made. The tower was only built in 1307, for example.

If you’re an art lover, head to Jorge Vieira Museum where part of the sculptor’s life work is displayed. You can check out the permanent exhibition which was donated to the city of Beja, as well as other temporary exhibitions by other artists.
Who was Jorge Vieira? Jorge Vieira passed away in Estremoz in 1988, but throughout his life, had a spectacular career and is one of the most successful Portuguese artists. He frequented the Slade School of Fine Arts in London in the 30s, working under Henry Moore and Reg Butler. He then heads back to Portugal and settles as a sculptor there.

3. Explore the Roman ruins in Pisoes

In Pisoes, Beja lies the Roman ruins of an urban villa dating back to the first century, discovered in 1967 by accident. The artifacts discovered on this archeological sites, such as black ceramics indicate that different groups lived here, such as the Visigoths and Romans. Everything from ceramics, glass, bronze, and coins were found on the site.

A gorgeous part of the villa is a small altar than invocates the goddess Hygieia, which suggests that the Roman family occupying the residence belonged to the Gaio Atilio Gordo Clan. It is presumed that the building was used for agricultural enterprise, supplying food to the town of Beja, which in Roman times was called Pax Julia. The area has diverse biodiversity and fertile soil, making it the perfect place for this.

4. Tour the Botanical Museum of Beja

Located in the center of Beja, the Botanical Museums is situated in the Beja Agricultural School, committed to the conservation and study of economic and ethnobotanical botany. It is open to visitors, featuring temporary exhibitions throughout the year related to the field. You can learn about the different use of plants such as medicinal herbs and coloring agents, as well as discover diverse species. Don’t expect a huge museum, this is a small one, but very interesting if you are into this niche.

While you might have heard that the region of Douro is best known for its wine, it’s not the only one! The Alentejo is one of the main wine-producing regions of Portugal, therefore heading to a wine tasting in Beja is a must. Alentejo wine is thought to have started by the Romans in clay hoops. Today, many Alentejo wines are classified as DOCs, meaning Controlled Origin Denomination, a high-quality classification.

Book this DOC wine tasting to try out premium wines from the Alentejo, the best batch of the year. The wine tasting is hosted in Cella Vinaria Antiqua, a secular cellar-museum that has been converted into the production and preservation of the technique of producing wine clay hoops. You will get to witness this ancient technique and taste some of the best wine in Portugal. 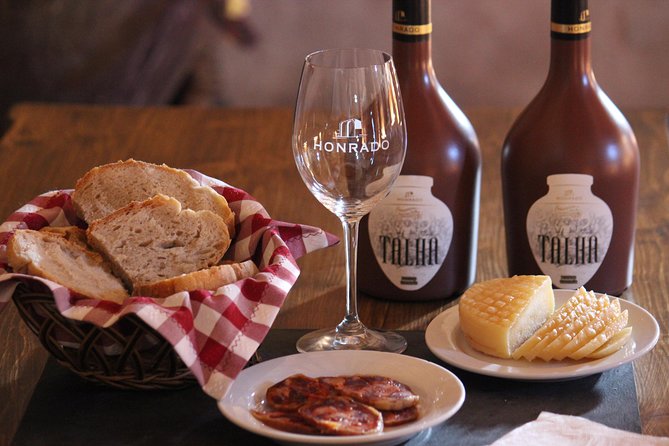 Beja is a 2-hour drive from Lisbon and a 4-hour drive from Porto. You can also opt for a 3-hour train from Lisbon or a longer bus ride with Rede Expressos, the latter being more affordable. However, the best way to explore Beja and the surrounding areas is to rent a car.

When you arrive in Beja, you can use the public bus system, however, the scheduled times are sparse and unreliable. Instead of having to walk 30 to 60 minutes for a bus, having a car gives you more flexibility. Parking is also very cheap and free in many places.