9 Best Things To Do in Fatima, Portugal

Located in the district of Santarem in the Central Region of Portugal, Fátima is a city known all over the world for its religious historical context. With millions of religious visitors every year, this peaceful city is surrounded by mountains, green landscapes, and quaint villages with stoned houses, featuring plenty of activities and things to do. What makes Fatima special is not just its stunning surroundings, but the famous Sanctuary of Fatima that is known for its pilgrimage, the location of the Miracle of Fatima. The sanctuary even sparks the curiosity of atheists and is welcoming to all religions, not just Catholicism. Before we get into the best things to do in Fatima, let’s take a look at why the Portuguese city is so popular among religious pilgrims and tourists alike.

Guide to the Fatima

What Happened at the Miracle of Fatima?

In 1917, three Portuguese shepherd children witnessed the apparition of the Virgin Mary, the Mother of Jesus, six times over six months. The three shepherds said that Mary, also known as Fátima told the children the “Three Secrets of Fátima”. These were apocalyptic prophecies that according to Catholic interpretations mentioned events such as World War II, the rise and fall of communism, and the assassination attempt of Pope John Paul II. Fátima allegedly told the children to spread these secrets and that sinners would need to be converted as their evil behavior was the main cause of these issues.

These alleged events were declared miracles in 1930 by the Catholic Church and ever since the city of Fatima remains a holy pilgrimage site with over 8 million visitors a year.

What happened at the Miracle of Fátima?

Here are the 9 best things to do in Fatima, from tourist attractions to museums, and sightseeing.

1. Visit the Sanctuary of Fatima

The Sanctuary of Our Lady of Fátima, a site with Catholic religious buildings was built in the place where the three children were visited by the Virgin Mary. The first building was built in 1919 by the locals and others developed over the decades. The sanctuary was officially consecrated in 1953 and a year later, it was given the title of Basilica by Pope Piux XXI.

Today, the Sanctuary of Our Lady of Fátima has multiple religious buildings, monuments, and statues of saints. Although the Chapel of Apparitions and the Basilica are the most famous, you can also visit the Perpetual Adoration Chapel and the Monument of the Sacred Heart of Jesus, among others.

We recommend taking in the grandiose nature of the main square where you can enjoy the calming view of the Basilica of Our Lady of the Rosary. If you can, purchase a candle near the Chapel of Apparitions and light a candle. Use it to pray or set an intention, as well as honor someone who has passed. Even atheists take part in this Fatima ritual.

2. Sit silently at the Chapel of Apparitions

A focal point of the Sanctuary of Fatima, the Chapel of Apparitions was built by the locals on the site where the three children reported seeing Mary. Mary allegedly told the children she wanted a chapel made there in her honor. The Chapel of Apparitions was completed two years after the sightings, in 1919, under the construction of a mason called Joaquim Barbeiro from the village of Santa Catarina da Serra. A mass was officially allowed in the chapel by the local bishop in 1921. Even if you are not religious and do not want to engage in prayer in the chapel, we recommend you sit silently and enjoy the peacefulness of this sacred chapel.

3. Take a guided tour of Fatima and nearby cities

If you’re looking to explore the city of Fatima from Lisbon, we recommend taking this full-day guided tour to Fatima, as well as Nazare and Obidos. You will get to visit the Sanctuary of Fatima in a personalized experience on a guided walking tour, as well as admire the medieval monuments of Obidos. The guided tour also takes you to the beach town of Nazare to stroll along the cliffs and enjoy the ocean views. The tour is in English and includes free drinks. 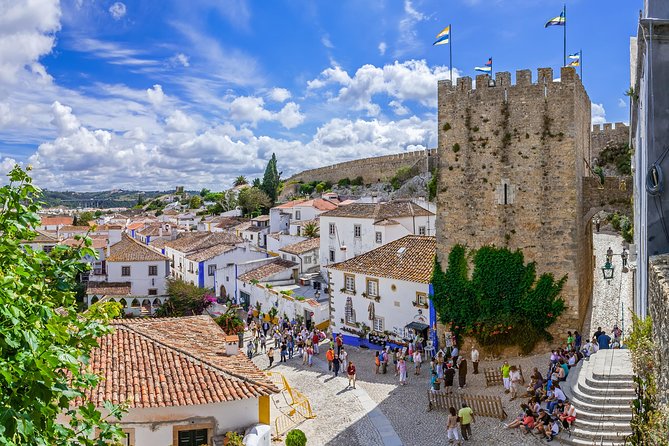 4. Explore the house of the three shepherd children that witnessed the miracle

Remember the three shepherd children that witness the Miracle of Fatima? You can actually visit the houses where the children that saw Mary back in 1917 lived. There are two houses in the tiny village of Aljustrel, a kilometer away from the sanctuary: the “Casa de Jacinta e Francisco Marto” and the “Casa da Lucia”. The first house was where both Francisco and Jacinta died after the First World War of the flu epidemic. They lived here with their parents and three other siblings. The second house was Lucia’s house, who was the cousin of Jacinta and Francisco. Lucia survived the flu epidemic, became a nun, and lived until 2005, dying at the old age of 97.

Moinhos Velhos Cave, also known as “Gruta de Moinhos Velhos” is a cave with over 9 kilometers in extension, only a 20-minute drive from the sanctuary. It is the biggest cave found in Portugal. The cave was first entered by humans in 1947. The caves are located in the Limestone Mountains, which form the Estremadura Limestone Massif. Tickets cost €7 for visitors above the age of 12. Children under five years old can visit for free and children from 5 to 11 years old pay €4.20.

6. Visualize the Miracle of Fatima at the waxwork museum

The Wax Museum of Museum is a 5-minute drive from the sanctuary and narrates the story of the 1917 apparitions of Mary with life-like wax figures in approximately 20 minutes. 32 scenes and 120 figures report the main episodes of these events spanning a 34-year period. Children under 6 do not pay. Adults pay €7.75. University students and families of four minimum get a 20% discount.

Located in Ourem, the Natural Monument of Dinosaur Footprints is a dinosaur track site discovered in 1994 by João Carvalho, a member of the local archeology association. Its located around 10 kilometers from Fátima in the heart of the Serras d’Aire e Candeeiros Natural Park. The footprints are over 175 million years old and were created by sauropods, dinosaurs with small heads and long tails and necks. This place has some of the longest dinosaur tracks in the world, with the longest footprint measuring 147 meters long. The entry fee is around €3.

8. Try the regional cuisine of Fatima

Like most places in Portugal, Fatima has some excellent dishes such as bacalhau (codfish), polvo à la lagareiro (octopus), bitoque (thin steak), arroz de pato (duck rice), baba de camelo (condensed milk mousse), and more. For some of the best regional cuisine in Fatima, we recommend heading to a restaurant called Tia Alice, a 5-minute drive from the sanctuary. A Michelin selection, Tia Alice is a rustic restaurant that serves delicious duck, roasted lamb, codfish, and more. The bill for two people will set you back around €50, but it is totally worth it. For a cheaper alternative, we recommend a restaurant called O Leque, a Portuguese tavern with traditional flavors that serves the classic bitoque (think steak) and frango no churrasco (barbequed chicken). A meal for two here will cost you around €20.

9. Learn about the Miracle of Fatima at the interactive Museum

A 10-minute walk from the Sanctuary of Fatima, the Interactive Museum – Miracle of Fatima takes you through a 40-minute story of the Miracle of Fatima through hologram images and a 3D movie. The museum gets into the nitty-gritty details of the six apparitions and the young shepherds. If you are a large group of 10 or more people, you get a 50% discount so make sure to bring your friends. Regular adult tickets cost €7,50 and children pay €4.

5-day Portugal Itinerary: Make the most out of a short trip to Portugal

Energy in Portugal: Where does Portugal get its energy from?